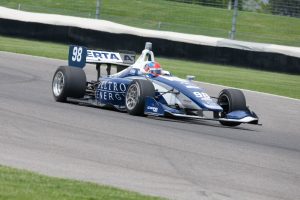 Colton Herta repeated his back-to-front performance from the first race to make it two wins out of two in Indy Lights on the Indianapolis Motor Speedway road course.

Herta was fifth exiting Turn 1 on the first lap, but fought through to take his second win of the season and move to within one point of the championship lead.

Juncos Racing’s Victor Franzoni was the first to succumb to Andretti Steinbrenner Racing driver Herta, losing fourth place at Turn 4 later on in the first lap.

It looked like he would take third from Belardi Auto Racing’s Aaron Telitz at the start of the next lap, but contact between the pair meant Franzoni slipped by both and Herta remained in fourth.

It wasn’t until lap 7 of 35 that Herta was close enough to challenge for third again, and he took the place from Franzoni down the inside of Turn 1.

Telitz’s BAR team-mate Santiago Urrutia held the lead at this point, with poleman Patricio O’Ward one second behind.

As they battled, Herta closed in, and he went into the final third of the race on the tail of the lead battle.

On lap 22 O’Ward locked up going into Turn 1, and Herta moved into second place. In a repeat of the first race, Urrutia found himself having to defend with increasing aggression to keep Herta, clearly the faster car, behind.

With five laps to go Herta made it around the outside of the leader at Turn 1, only for Urrutia to lock up and lead to both taking to the grass. This gave the Uruguayan some breathing room, but it only took two laps for Herta to get back on his gearbox.

Herta this time went for an overtake at Turn 7, only to be chopped up by Urrutia. He got back alongside into Turn 9, this time making contact with the side of the leader’s car, and they ran side-by-side throughout the rest of the lap.

Urrutia squeezed Herta onto the grass through Turn 12, which rather than holding him up, meant Herta had a better run down the pit straight. They were once again side-by-side through Turn 1, with Urrutia using up all the track and more.

This meant Herta was essentially driving on the kerbs, and this hampered his ability to switch direction for Turn 2. The pair collided, and Urrutia wad punted into a spin and down to fourth place.

Herta was free of blame in the incident, and completed the last two laps with ease for his second win of the weekend.

A front-left puncture in the closing stages meant O’Ward was unable to benefit from Urrutia’s demise, and it was Telitz and Franzoni who completed the podium.

Andretti team-mates Ryan Norman and Dalton Kellett finished fifth and sixth, with O’Ward a lapped seventh. The Mexican still leads the championship by one point over Herta, with Urrutia a further five behind.