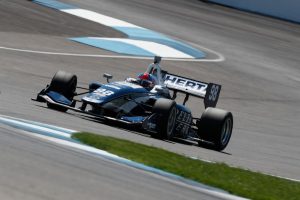 Colton Herta made up for his 2017 heartbreak by winning the first Indy Lights race of the weekend on the Indianapolis Motor Speedway road course.

Herta was running second last year, and on the tail of winner Nico Jamin, when a mistake and a puncture led to him dropping down the order and signalled the beginning of the end for the teenager’s title ambitions.

The Andretti Steinbrenner Racing driver has had a tougher start to the season this year, with a singular second place as opposed to the two victories he had under his belt last year, but was dominant at Indianapolis.

He lost out on pole to championship leader and Andretti team-mate Patricio O’Ward by three hundredths of a second, and found himself in sixth at the start after running in the wheeltracks of the poleman.

Victor Franzoni, who had qualified third, made contact with the rear of O’Ward at the entry of Turn 1, resulting in the leader and Herta going across the grass.

O’Ward finished the first lap in fourth, and retained that position until Herta got through at Turn 1 on lap nine of 30.

Herta had been the fastest man on track, and only took three laps to close in on and overtake Telitz for second. At this point Urrutia had a 1.35 second lead, but it was swiftly down to less than three tenths as Herta used up his push-to-pass.

The next time round Herta did make the move stick at Turn 1, despite Urrutia making two direction defensive ‘moves’ on the straight and once again braking at the last second.

Herta was untouchable form that point, and he stretched out a five second lead to take his first win of 2018.

Urrutia slipped into the clutches of Belardi Auto Racing team-mate Telitz, but managed to retain second in both the race and the standings.

O’Ward never looked like the man who won three times in the first four races, but his off-the-pace fourth place means he is still the championship leader.

Franzoni was sandwiched by Andretti drivers Ryan Norman and Dalton Kellett in sixth, having lost second place on lap 11 after making contact with Telitz. Juncos Racing team-mate Alfonso Celis didn’t take part in the race, but did announce his graduation to the team’s IndyCar squad for the race at Road America.