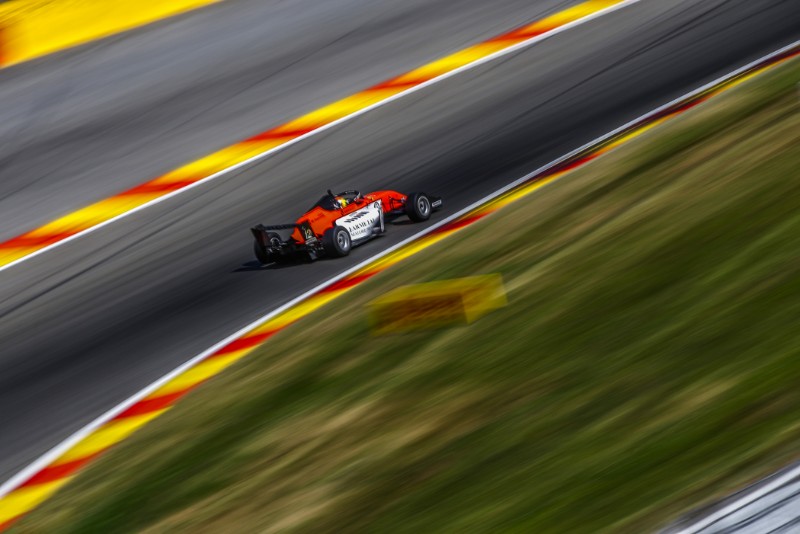 The Italian started the race in third, but was quickly passed by Federico Malvestiti. He reclaimed the position at Les Combes on the opening lap, and moved up to second with a move on Victor Martins at the same corner two laps later.

By the end of lap three of 14, Colombo was already threatening poleman Leonardo Lorandi for the lead, and he slipstreamed past the JD Motorsport driver at the end of the Kemmel Straight on the next lap.

Colombo pulled away as soon as he made it into the lead, as a train of cars fought over the positions behind.

While challenging Lorandi for second, Martins ended up losing places to Caio Collet and Federico Malvestiti, and it was the latter two who completed the podium after Lorandi started to fall down the order.

Malvestiti, who has only scored points once prior this season, defended third place from Oscar Piastri for several laps late in the race, eventually conceding the position when the Australian used superior driver out of the second part of Les Combes on the last lap.

After being overtaken, Malvesititi span and ran into the path of Martins and his title-rival Alexander Smolyar, who had climbed up from 21st on the grid. Martins made brief contact, while Smolyar made no attempt at avoidance and flipped over the top of Malvesititi.

The race was red flagged shortly afterwards, leading to the result being taken from two laps before. As a result, Bhaitech’s Malvestiti took his first podium, ahead of Piastri, Martins, Smolyar and Lorandi.

Brad Benavides edged Sebastian Fernandez to ninth, the latter setting fastest lap. Completing the points was Petr Ptacek, although he is currently under investigation for an incident at Bruxelles which put Frank Bird into a spin.