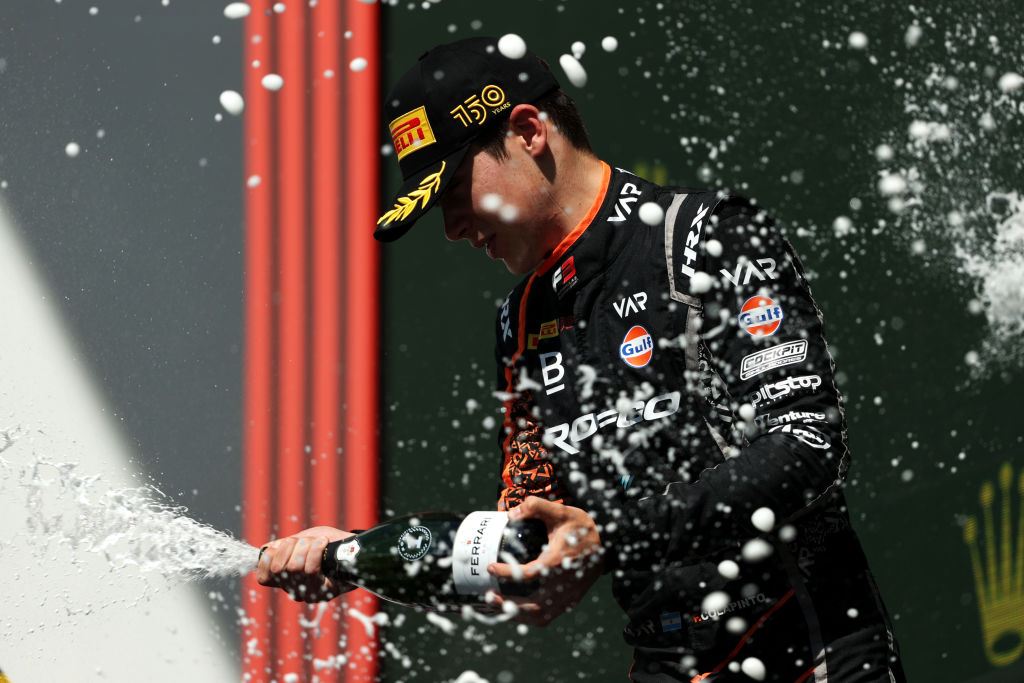 The top three on the reversed grid top held on to their positions at the start as all the cars made it through the first chicane, although Colapinto’s Van Amersfoort Racing team-mates Reece Ushijima and Rafael Villagomez had to cut it to avoid hitting the cars in front.

As the field exited the chicane, ART Grand Prix’s points leader Victor Martins went for a move around the outside of Prema title rival Arthur Leclerc. They made contact and Martins went into the gravel at Curva Grande, but he was able to keep control and rejoin at the back of the pack.

On-track battles continued on lap two with several drivers trying to make up places. MP Motorsport’s Alexander Smolyar, who was running in 10th, spun at the della Roggia chicane as Hitech GP’s Kaylen Frederick went around his outside.

The safety car then came out on lap four. Carlin’s Zak O’Sullivan had missed his braking point at the end of the main straight and lost control, going into the wall. Racing resumed four laps later with reversed-grid polesitter Colapinto leading.

Even though he waited until the start-finish line to accelerate, he couldn’t avoid being challenged by MP’s Caio Collet and Campos Racing’s Pepe Marti at the first corner.

There was drama behind and Hitech GP’s title contender Isack Hadjar, who had already taken the escape road at the della Roggia chicane on lap one, came into the pitlane for a new front-wing, ending his chances of scoring points.

As the race progressed, Marti dropped back, whereas Bearman closed on Colapinto, Collet and Trident’s Jonny Edgar.

On lap 15 out of 18, Bearman took advantage of the battle between Collet and Edgar for second place, and overtook them both by outbraking them around the outside going into the first chicane.

Bearman went then on to catch Colapinto and made his move for the lead around the outside of Parabolica on the last lap. But there wasn’t enough grip to steal the win, and he instead cut the points gap with second place.

A chaotic last lap allowed Martins to take the chequered flag in 10th, extending his lead by one point and putting Trident rival Roman Stanek out of the points.