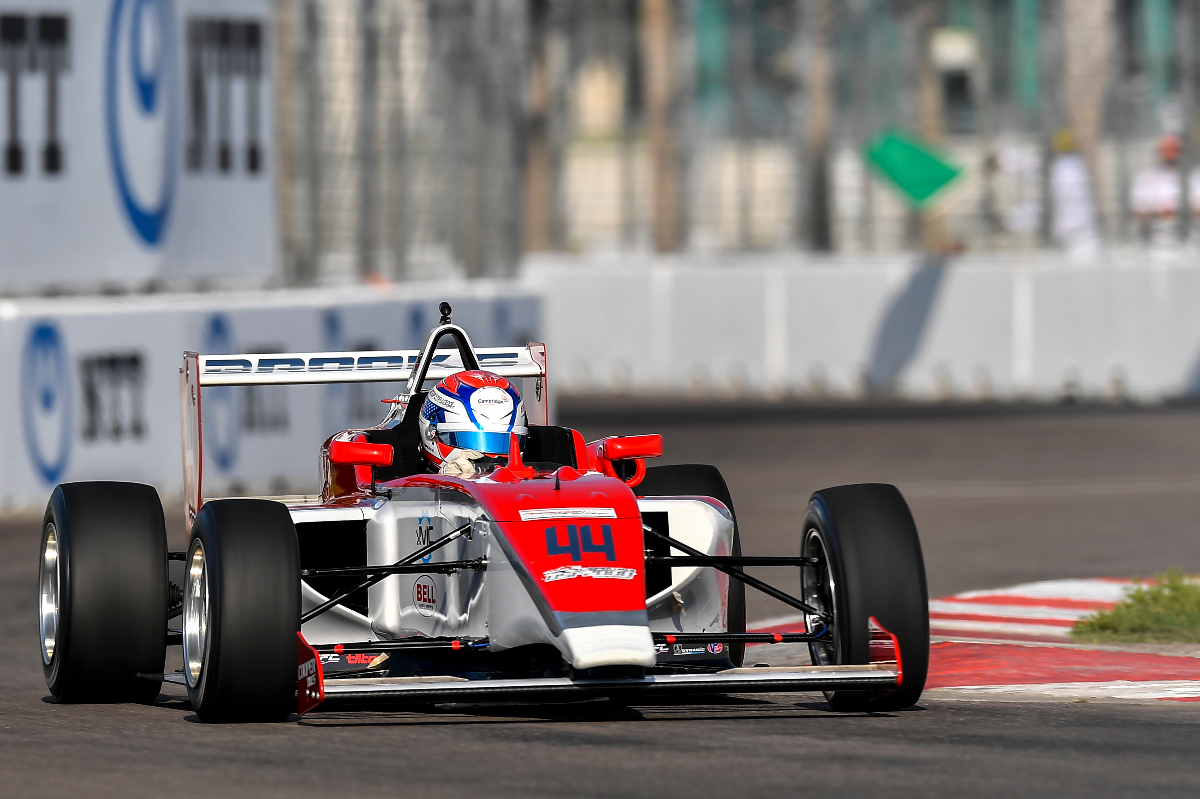 Christian Brooks won the USF2000 opener in St. Petersburg in an Exclusive Autosport one-two, in a race halted for a long time by a scary multi-car crash.

Brooks started on pole, and there was chaos on the opening lap for a multi-car accident at turn 8, which involved Kent Vaccaro launching over the top of Erik Evans and landing on top of him, and appeared to be started by Peter Vodanovich.

No drivers were reported to be injured from the incident.

Several other drivers were also eliminated, including Nolan Siegel – who missed practice and qualifying after feeling unwell on Friday – Trey Burke, Evan Stamer and Vodanovich.

The clean-up was so significant that the race had to be stopped entirely for a lengthy period of time.

When eventually restarted, Cape Motorsports’ Michael d’Orlando was battling with Turn 3 Motorsport’s Josh Green for third when they collided at turn 1, pitching d’Orlando into a roll that had him landing upside down, and damaging Green’s car significantly.

On the restart, Pabst Racing’s Yuven Sundaramoorthy was overhauled by Exclusive’s Billy Frazer, which allowed DEForce Racing’s Kiko Porto and Prescott Campbell to also get through.

Pre-race points leader Campbell, however, had wing damage that got worse on the bumpy street circuit, and it failed as he went into turn 11 shortly after the race reached its halfway point of the 20 scheduled laps.

This led to a full course yellow, and Sundaramoorthy was able to retake the positions he lost once the race returned to green.

There was one more caution period, as Pabst’s Jace Denmark-Gessel hit Jay Howard Driver Development’s Bijoy Garg into the barriers at turn 10, and series returnee Michael Myers clipped him.

The race concluded behind the pace car, with Brooks heading team-mate Matt Round-Garrido and Sundaramoorthy, who leads the points on third-place countback against Brooks.

Rowe came out on top of a decent scrap to secure eighth, while Campbell finished 16th after pitting for repairs and Green also met the chequered flag.