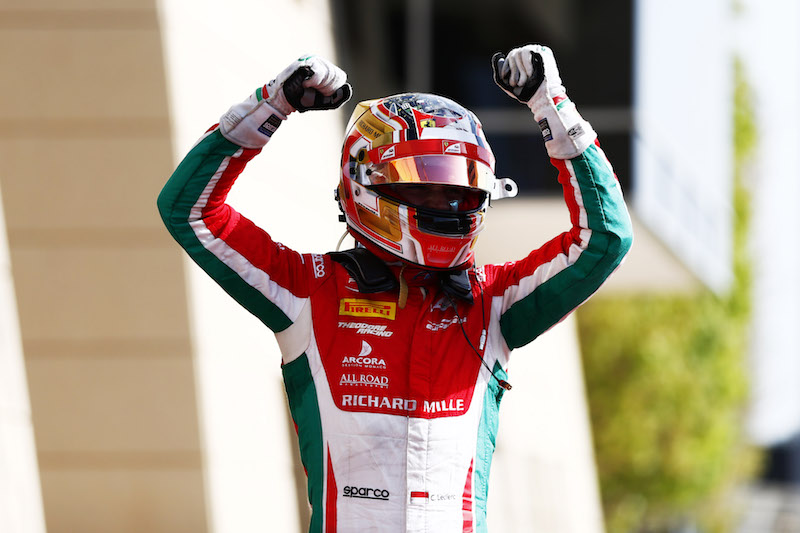 Prema’s Charles Leclerc came back from a mid-race pitstop to win the Bahrain sprint race and take his first victory in Formula 2 .

Leclerc was one of four drivers to make a pitstop during the race, expertly using the medium Pirellis to build a lead of 9.4 seconds before moving onto softs to attack for the final nine laps of the race and making 13 late overtakes.

Luca Ghiotto and Oliver Rowland completed the podium, 1.5 and 2.8 seconds behind the winner, after both being passed in the final two laps of the race and not having the grip to compete for the win.

Monegasque driver Leclerc started sixth on the grid, a position which effectively became fifth when polesitter Nobuharu Matsushita was forced to start in the pitlane with pre-race mechanical issues, but had a superb start to move up to third on the first lap of 23.

He then passed former GP3 team-mate Alexander Albon on lap four at Turn 4 after an early safety car period when Norman Nato spun off track with a rear-right puncture while fighting for fourth. Leclerc overtook early leader Ghiotto on lap nine, and went on to build his lead before a sensational fight to the front of the order after his pitstop to counter the issues he was having with tyre life which ruined his chances of a win in the feature.

DAMS’ Nicholas Latifi made amends for damaging his front wing during the feature race to finish in fourth place ahead of MP Motorsport’s Jordan King and Rapax’s Nyck de Vries. Albon and Artem Markelov, who attempted a wild strategy, going from softs to mediums, completed the points finishers.

Johnny Cecotto came across the line in ninth, 0.8 seconds ahead of Antonio Fuoco who was fighting for a podium until struggling with his tyres in the last six laps and falling one second outside of the points positions.

Matsushita eventually struggled to get through the pack, finishing down in 14th place, while Sergio Sette Camara finished last of the 18 classified drivers after making three pitstops in a race that went downhill for the Brazilian after believing he had a puncture on the first lap.