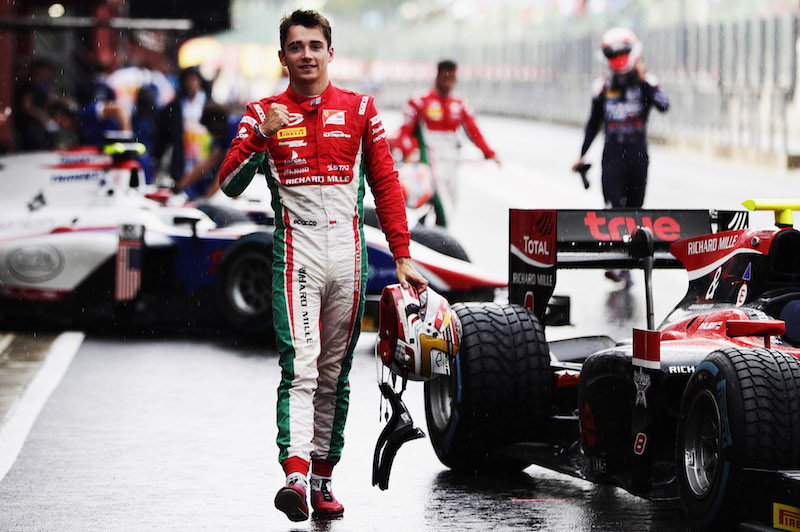 Charles Leclerc continued his Formula 2 qualifying dominance with his seventh pole position of the season in wet conditions at Spa.

The Ferrari-backed Prema driver was 2.4 seconds faster than anyone else on his first flying lap, and after team-mate Antonio Fuoco and DAMS driver Nicholas Latifi had spells on front, Leclerc returned to top spot halfway through the 30-minute session.

That would be good enough for pole position, with further rain during the session making it difficult – albeit not impossible – for anybody to improve.

Oliver Rowland did look on course for second but was beaten to the front row by his team-mate Latifi, who squeezed in a 2m21.510s just prior to a red flag with 3m43s remaining after Sergio Sette Camara spun exiting Turn 9.

Rowland looked on a mission to improve after the red flag – passing two cars in Eau Rouge on his out lap – and found time in the first sector, but he went very deep off track in worsening conditions at Rivage.

At the circuit where he made a points-scoring GP2 debut two years ago and scored his first podium last year, Gustav Malja qualified inside the top 10 for the first time this season in fourth.

That was two places in front of his new Racing Engineering team-mate Nyck de Vries, with the pair separated by Fuoco.

Luca Ghiotto was seventh ahead of Roberto Merhi, who has joined Rapax this weekend for his second F2 appearance.

Nobuharu Matsushita and Jordan King are set to start off row eight after tough sessions, with fellow race winner Norman Nato only 18th.