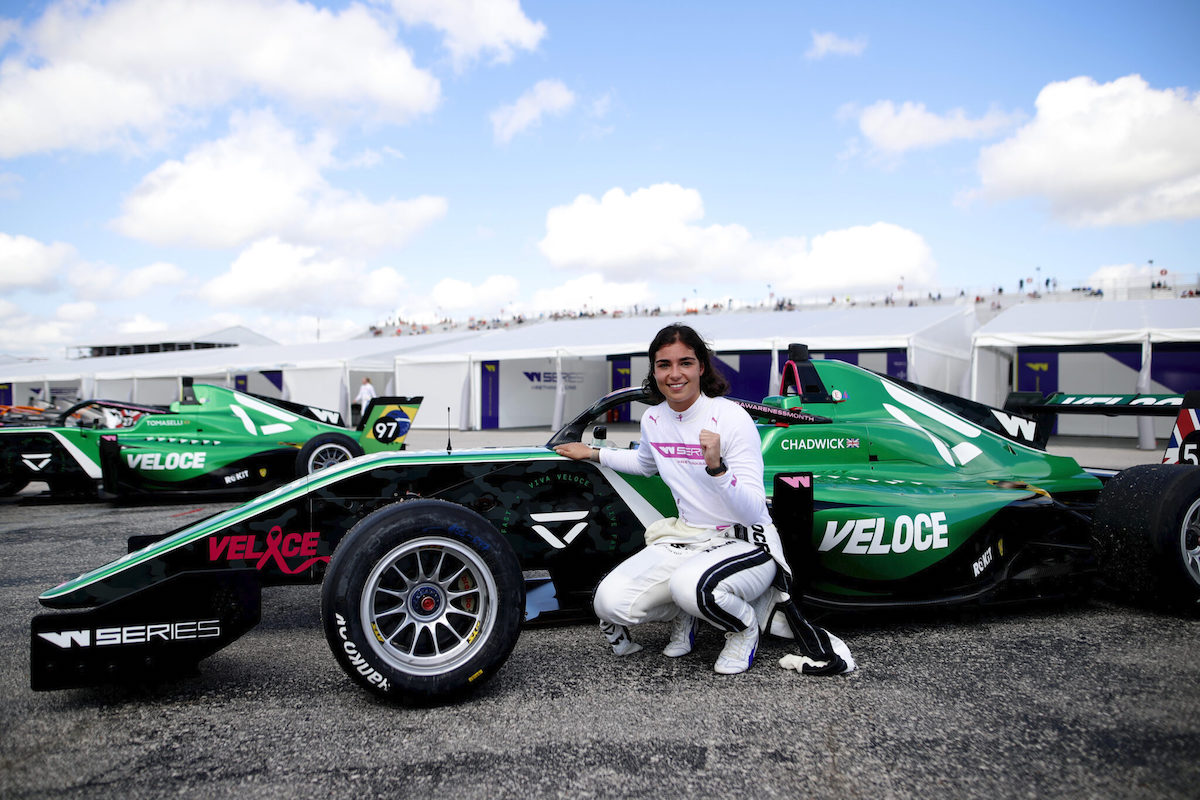 Jamie Chadwick has retaken the W Series championship lead by winning the first race of the season-ending doubleheader at Circuit of the Americas.

Abbi Pulling started on pole position but it was Emma Kimilainen who got the best launch from fourth place. For a brief moment, Kimilainen led as Pulling was forced off the track, but it was Chadwick who was able to cut back and get into the lead as Kimilainen was stuck in third gear off the exit of the corner.

Belen Garcia, starting sixth after a three-place penalty for impeding Jessica Hawkins in qualifying, made an excellent start to take second, ahead of Kimilainen, Pulling and Sarah Moore, while Chadwick’s main title rival Alice Powell made three spots up into seventh.

Garcia’s pace, however, wasn’t strong and that allowed Chadwick to open up a gap of 2.4 seconds in the opening third of the 30-minute race before Kimilainen and Pulling got by.

Powell, meanwhile, picked off Fabienne Wohlwend, Moore and then Garcia in quick succession to get up to fourth, but did not have the pace of Kimilainen and Pulling.

Out front, Kimialinen made a bit of progress into Chadwick’s lead, but could not get it below 1.4s for a while.

In the closing stages, Kimilainen was able to make a bit more progress, with the top four all close, but ultimately came up slightly short and was eliminated from championship contention.

Chadwick’s third win of the season, meanwhile, put her back in the championship lead and gives her a 10-point lead over Powell into Sunday’s finale, which she starts on pole.

Powell had plenty of pace late on, taking the fastest lap, and took the final podium place to limit the damage done in the title fight. She starts ninth on Sunday.

On the final lap she got by her protege Pulling, who was shown the black and white flag for exceeding track limits. She went on to finish fourth and could well receive a penalty after being shown running off the circuit again late on.

Beitske Visser was able to recover from a so-so opening lap to take fifth, while Hawkins got by Moore late on to take sixth. Hawkins survived light contact with Marta Garcia while battling with Belen Garcia, with Marta Garcia spinning round and out of the points.

Nerea Marti climbed five places in the race to take eighth, ahead of Wohlwend and Miki Koyama, who recovered after her suspension issues in qualifying to take the final point.

Sabre Cook was 11th in her home race ahead of Belen Garcia, who continued to drop down the order.

Abbie Eaton dropped to the back on the opening lap, never recovered and pulled out of the race in the second third with a mechanical issue.