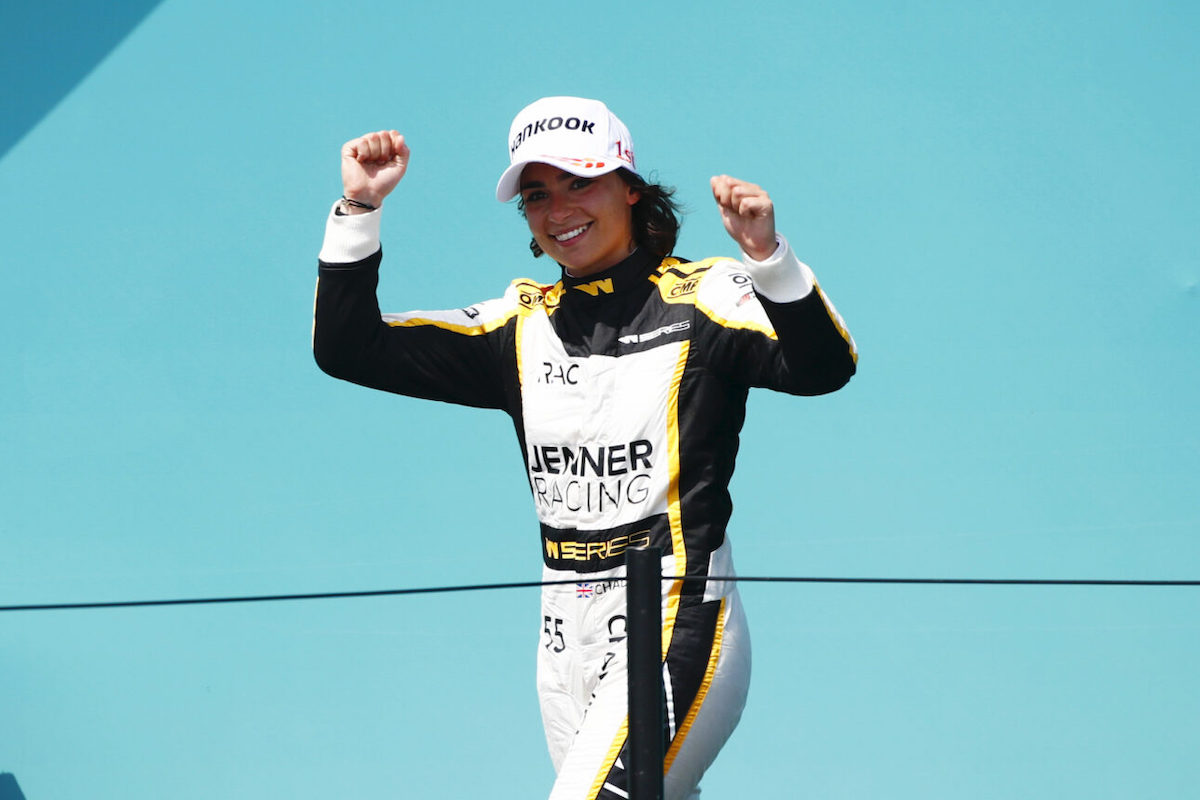 Jamie Chadwick has taken another win in the second W Series race of the weekend in Miami ahead of Nerea Marti and Alice Powell.

Despite a confident run from Marti where she began to close in on Chadwick for a while, she was unable to close the gap to the leader, backing off as Chadwick continued her strong pace which has characterised her W Series career up to now.

An incident involving Emma Kimilainen and Powell brought drama on the last lap of the race as the pair collided, Kimilainen spinning as Powell attempted to take third position. Powell limped home to third with a damaged front wing to complete the podium.

Pole-sitter Chadwick held the lead as the lights went out with Marti and Kimilainen following behind.

Marti struggled to keep Kimilainen behind as they approached turn 11, but Kimilainen went deep, missing the apex and allowing Marti to maintain the position.

Kimilainen soon made it past Marti and their battle gave Chadwick the chance to extend her lead to nearly two seconds.

Marti’s increasing confidence in the car showed, taking second place back from Kimilainen in the following lap, then setting her sights on Chadwick’s lead for a while.

Powell tried to make a brave move on Kimilainen through turn 1 as the clock ticked down, but failed to get ahead, allowing Belen Garcia to close even closer, and they raced wheel to wheel through the twisty middle sector,before the last lap incident.

Behind, Abbi Pulling made good progress through the midfield, taking positions from Jessica Hawkins and Fabienne Wohlwend before setting a series of fastest laps as she closed in on Beitske Visser and made her move on the outside.

Pulling continued to keep up the pressure in the final minutes, this time on Sarah Moore, taking the position before they came down the pit straight. Moore attempted to switch back through the first corner but Pulling defended well.

Wohlwend started with a five place penalty after a collision between herself and Abbie Eaton at Turn 4 in race 1. She struggled to make much progress on older tyres than the rest of the grid, finishing 11th.

Bruna Tomaselli had an incident in the final sector in the early minutes of the race, which set her back to 17th position in front of Juju Noda, before coming into the pits for a fresh set of tyres.

Tereza Babickova had the black and orange flag waved in the closing laps and was forced into the pits to change her front wing.