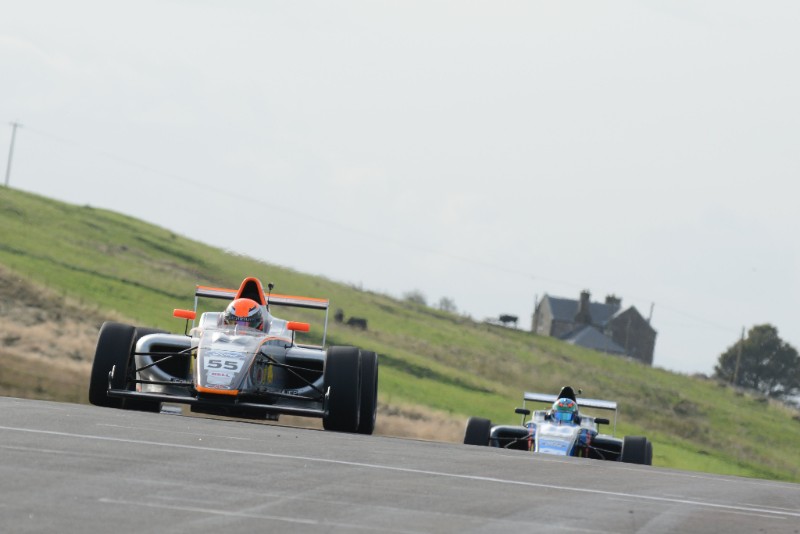 Carter Williams held off a race-long challenge from Sebastien Alverez to take victory in the second British Formula 4 race at Knockhill.

The JHR Developments driver was never able to pull more than a second ahead of Alvarez, but equally the Mexican was unable to find a way through and was often forced to defend against Williams? team-mate Josh Skelton.

The pair finished nose-to-tail, with Williams taking his third win of the season by 0.626 seconds.

Championship leader Zane Maloney faced a difficult race. Skelton managed to pass the Carlin driver on the opening lap and, though he was briefly able to reclaim the position, it was the start of a fall backwards through the field.

Richardson Racing’s Luke Browning and Arden’s Tommy Foster both found a way past Maloney at the hairpin. The second Arden car of Bart Horsten and Alvarez’s Double R Racing team-mate Louis Foster, who had started from the back of the grid, followed a few laps later.

In the closing stages of the race, Maloney dropped behind another Arden driver in Alex Connor, crossing the line ninth, though he was able to make up a position when Horsten was handed a 10-second penalty for jumping the start.

Maloney’s poor race meant Alvarez was able to close the gap to the Barbadian in the standings to 33 points.

Skelton spent the race switching between attacking Alvarez and defending against Browning.

Browning was briefly able to take third but Skelton soon found a way back past and that put the fourth placed driver under attack from those behind.