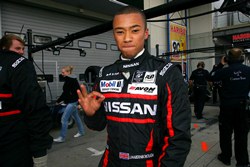 Tincknell, 21, is no stranger to Carlin or F3, having raced in the British F3 category in 2011 and 2012 (during which he represented Fortec and Carlin in the series). Before that, the Brit started off his junior single-seater career in the now-defunct Formula Renault 2.0 UK, where he finished fifth two years in a row. He was 11th in his first year of British F3, finishing the season with one win and three other podiums, but significantly improved for the second year, rounding out the top five of the championship with four wins to his name.

Canadian Latifi, 17, is the youngest member of Carlin’s European F3 squad, with only marginal experience in the class as he partook in the final season of the now-defunct Italian F3 last year, finishing seventh in the standings with a sole win at Vallelunga. His lack of experience didn’t particularly show in the beginning of this year, however, as the youngster performed admirably in a full-season of the Toyota Racing Series, matching some of the top names in F3 at times and finishing ninth in the standings.

For Mardenborough, 21, that very Toyota Racing Series season wast he graduate of the Nissan GT Academy’s first foray into single-seaters. Finishing tenth in TRS with a front row qualifying being the highlight of the season, his deal to race in F3 with Carlin follows an impressive testing performance for the squad at the end of last year as he gathered experience in machinery with higher downforce ahead of a planned move into Le Mans Prototype racing after a strong campaign in British GT.

Finally, 18-year-old King, who graduated from karting in the latter part of 2010, is most notable for his performances in various FR2.0 classes. With podiums in the Eurocup series and the UK series and wins in the NEC series (where King finished second in 2012), his track record is made even more impressve by his consistent record in the Indian MRF Challenge series, where King claimed the title in 2012 and took second in? 2013 against formidable opposition.

“While we did have drivers interested in the British F3 Series, circumstances have dictated that we now focus on the FIA European Formula 3 Championship and I?m extremely pleased to have four such talented drivers with us for the season ahead,” said Trevor Carlin.

“Harry makes an extremely welcome return to the team and his experience of F3 will be key; we have high hopes for him this season. Nicholas is going to have a very steep learning curve, with practically every circuit a new experience for him. This season will be about learning as much as possible for him, as it will for Jann, who let?s remember only has one season?s racing behind him. Jordan will also be an F3 rookie, but despite it being quite a young team, I look forward to seeing what surprises they can deliver as they progress throughout the season.”

The 2012 season saw Carlin field two cars in the F3 Euro Series on a full-time basis, with Buller and Carlos Sainz, Jr. racing for the team. With the former finishing in fifth and the latter in ninth, Carlin took third overall in the teams’ standings.