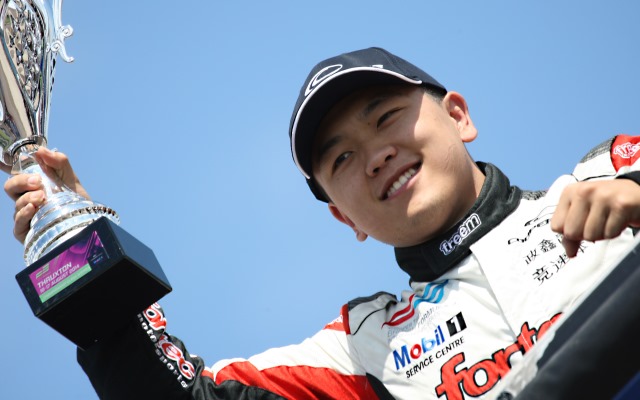 Having taken his first victory in the British F3 series yesterday, Fortec’s Martin Cao continued to increase his championship lead with another win in race two of the Thruxton weekend.

Cao put on a controlled drive in drying track conditions to finish 3.6s ahead of his teammate and main championship rival Matt Rao.

The opening lap saw Cao work his way up from fourth on the grid to the lead, which he would maintain for the remaining 28 minutes.

The Chinese driver was unmatchable over the opening stint of the race, finding around a second per lap on Rao to build up a gap of nearly seven seconds after ten minutes of racing.

With the times tumbling down on a rapidly drying circuit, Cao soon ceased being the pacesetter. Instead, that honor now belonged to Peter Li Zhi Cong, who began catching Rao with several consecutive fastest lap.

The gap between the Fortec teammates out front staying relatively stable meant that the Carlin driver was quickly gaining on both of them and, finally, he started to feature prominently in Rao’s rear-view minutes.

However, the British driver manage to respond in no time, upping the pace to leave Cong a distant third and somewhat close in on Cao.

With the race now in its final minutes, Rao stood little chance of actually troubling his teammate for the lead and had to settle for second, claiming the fastest lap with his final effort.

Double R squadmates Max Marshall and Camren Kaminsky produced a solid battle for fourth after colliding off the grid in the opening race. Kaminsky overtook Marshall on lap seven, but the latter managed to keep within a second of the American and tok the spot back for good after the halfway point of the race.

Cao and Rao are now separated by just four points in the standings and will make up the front row for the final race of the grid – with the Brit leading the Chinese driver.