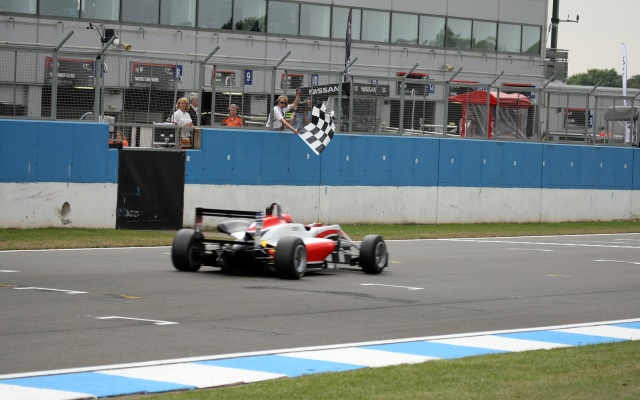 Martin Cao has taken a step closer to the British F3 title with victory in the opening race at Donington Park, while rival Matt Rao had to recover to third after stalling at the start.

Cao moved into the lead after starting on pole position, while Rao fell to fifth and last, ten seconds off the lead. By the end of lap four, Cao had opened up a three-second advantage over second-placed Max Marshall.

The gap remained static at between three and 3.1 seconds until lap nine, when Marshall upped his pace and began cutting the gap. He set his personal best lap on the 14th and final tour, and closed to just 0.8 seconds behind Cao.

Rao got up to fourth past Peter Li on lap six and then took third on lap nine when Camren Kaminsky spun to the back. Setting the fastest lap and claiming the bonus point on the penultimate lap, he finished just 1.9 seconds behind Cao.

With Cao scoring 25 points for the win and Rao getting 15 plus one for the fastest lap, the gap between the pair has gone up from 15 to 24 with two races left. As 26 points available in the final race of the weekend, Cao just needs to beat Rao in race two to put himself out of reach and wrap up the title. That said, Cao will start fourth on the reverse grid, two spots behind Rao.

Kaminsky will start from pole, after recovering from his spin to get back ahead of Li on the last lap of the race and take fourth.