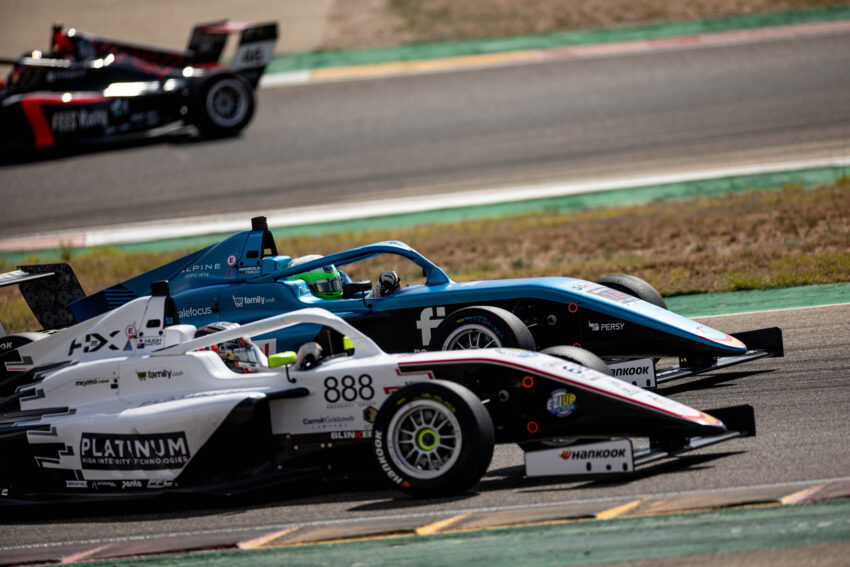 All six of Campos Racing’s cars have been disqualified from the first two of this weekend’s Spanish Formula 4 races at Navarra.

Due to the four-car limit on teams, three cars each are entered to score points for ‘Campos’ and ‘Campos Racing’ in the teams’ championship. The fleet of vehicles have all been removed from the race one and two results due to illegal parts modification.

Campos mechanics added their own metallic grilles to the three gill-like louvres that are on the side of the Tatuus T-421’s sidepods to prevent debris getting in, with no performance gain intended. While that is allowed on Formula 2 and FIA Formula 3 cars, the Tatuus manual for F4 only allows a fence-like grill to be added in front of the radiator at the front entrance of the sidepods and provides no exceptions for modification further back in the sidepod.

Spanish F4’s technical delegate noted the application of the grilles and made a report to the stewards, and Campos was disqualified (a decision it has appealed). The notice came in time for the team to remove the grilles before the final race of the weekend.

Hugh Barter had won all three races at Navarra for Campos, and started the first two from pole.

In race one the podium was completed by MP Motorsport’s Kirill Smal and Campos team-mate Nikola Tsolov, with Smal taking second from Tsolov while under safety car conditions. Smal kept the place as a marshal had erroneously waved a green flag at the last corner where he made his pass due to delayed communications between race direction and marshal posts.

Following the disqualification of the Campos cars, Smal is now declared race one winner ahead of team-mate Timoteusz Kucharczyk and Drivex School’s Gael Julien. It if Smal’s first Spanish F4 win.

In the shorter second race that took place on Sunday morning, Barter fended off Tsolov to win.

Smal finished third, but now leads Kucharczyk in another MP one-two while Drivex’s Daniel Nogales gets his first podium in third. Valerio Rinicella and Julien move up from seventh and eighth to fourth and fifth, and Gravlund scores four points in sixth. Nael jumps from 10th to seventh.

The disqualifications have no impact on Tsolov winning the title, which occurred in race three.

Global Racing Service’s Ricardo Gracia has been handed a drive-through penalty to be served in the first race of the final round at Barcelona, and Nael has a three-place grid penalty to serve at Barcelona too.