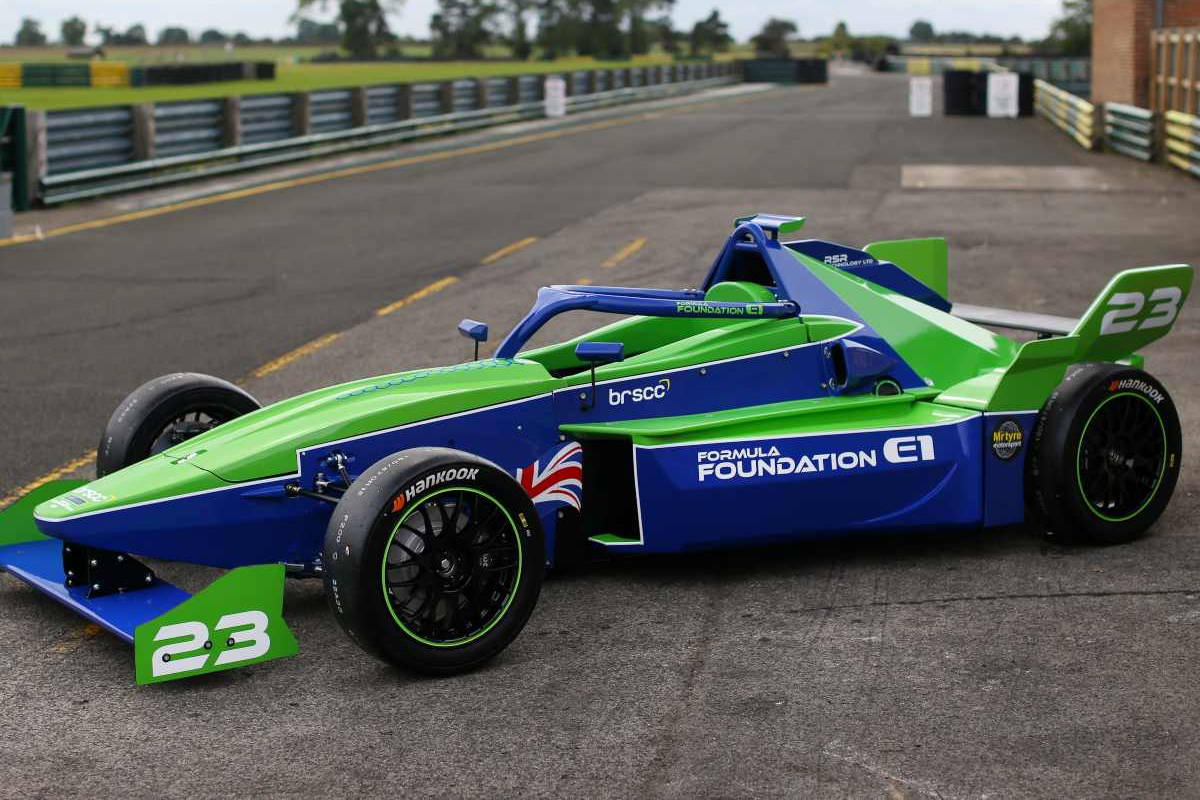 The BRSCC, the racing club behind Great Britain’s national Formula Ford championship, has announced it is launching an electric junior single-seater series.

Dubbed Formula Foundation-E, the new championship will utilise an adapted version of the FFoundation car from Steve Wills (formerly of FFord manufacturer Spirit) that has been testing in Britain and Finland for the last 15 months.

Originally designed by the Snetterton-based RSR Technologies to feature a traversely mounted 1.6-litre Ford Zetec engine and with the aim of having running costs lower than Formula 4, the rear wing-less FF-E1 car now will include a 120kW electric power unit supplied by ECOClassics, a firm that specialises in retrofitting electric powertrains to classic cars.

The power unit will draw charge from a 350V DC Li-ion battery pack with a usable capacuty of 18kWh, and the BRSCC says “battery charging is by way of readily available 240v 32A outlets, with the option of a CCS DC fast charge system”.

While it is am abitious charging system to use, particularly for club motorsport, ECOClassics has “given the battery pack, electric motor and final drive unit a full two-year period of warranty against defects or failures” while in racing use.

Switching to electric power and adding the halo cockpit protection device has made the FF-E1 heavier than originally envisaged, although RSR Technologies says the halo can be removed from the chassis if required.

Other safety features include “carbon front and rear impact boxes as well as carbon/diolen side impact panels, and to enhance safety even further the car also features Formula 1-style eight tonne-rated Technora wheel retaining tethers on all four [wheel] hubs”.

That brings the total weight of the car, built around a tubular steel spaceframe, to 550kg. This will make it heavier than F4 cars once driver weight is included. RSR Technologies believes the theoretical top speed of the FF-E1 is above 130mph.

A tyre supplier is yet to be chosen, with development done on Hankook tyres since the car’s switch to electric power. Due to the changed specifications, the FFoundation-E development team is working “to further evaluate the optimum tyre options to suit the car” with the car currently being run on “6.5 x 15 [wheels], fitted with 190/570R15 Hankook Ventus racing slicks”.

If enough orders are put in for cars, which in race-ready trim will cost £79,995, then group testing will begin “early 2023”. RSR Technologies has already committed to building six chassis, which would be ready for delivery next April. A second batch of six, should the orders come in, would be made available by August 2023.

The BRSCC plans to run races specifically for the car next year on its race weekends, meaning it will run alongside petrol-powered motorsport, before a full championship is launched in 2024. The likely format would be a 15-minute qualifying session and two or three 20-minute races at each race event. RSR Technologies will provide trackside technical support at all events.

FFoundation-E will demo the FF-E1 at the BRSCC’s FFord Festival at Brands Hatch on October 22/23.