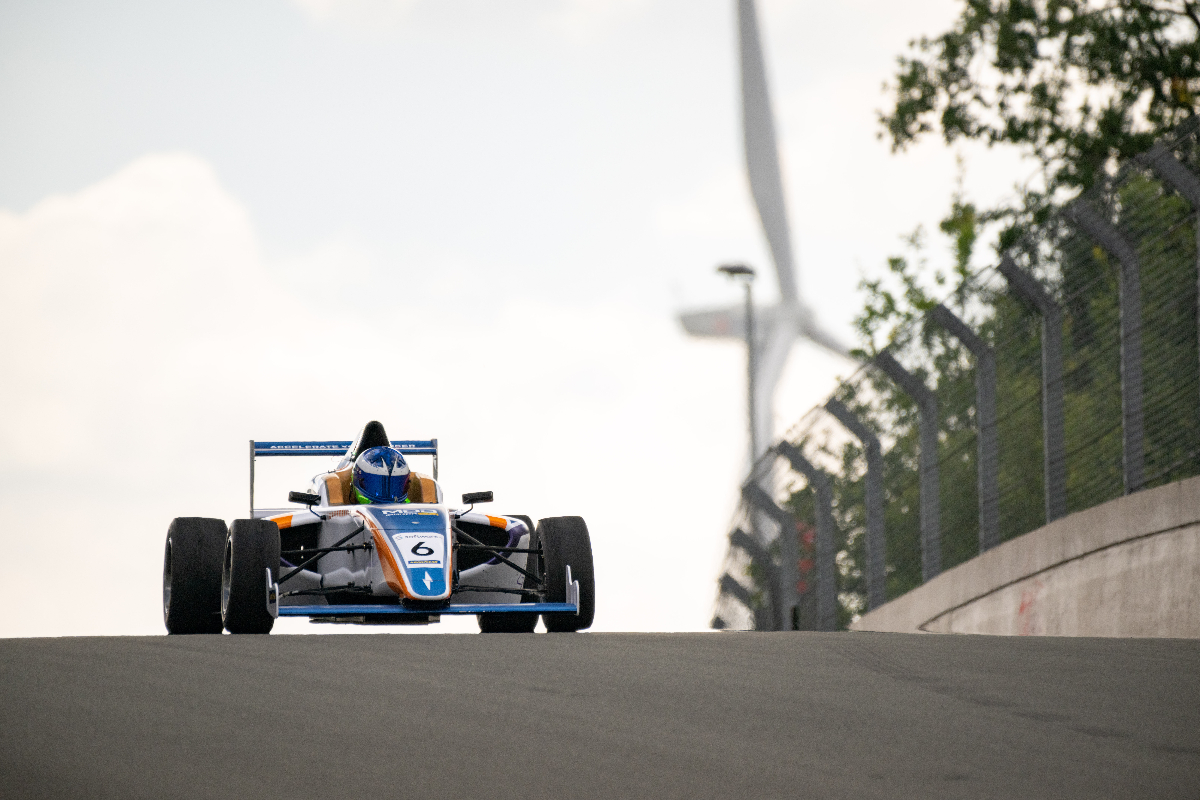 There was drama before the start, with poleman Ellis Spiezia putting his hand up on the grid and then Richard Morris stop-starting through the two formation laps and ultimately not starting the race at all which left six cars on the grid.

The race was reduced to 15 minutes plus one lap, with Hawes alongside Spiezia on the front row and Milan de Laet alone on row two with Morris unable to race. Lacking from the cars was regeneration capabilities, due to the inexperience of most of the drivers racing, and car-to-pitwall communication too.

Hawes took the lead from Spiezia on the opening lap, taking the outside at turn one and getting twitchy but still getting the move done. Spiezia almost had a chance to regain first place at the Villeneuve chicane, where Hawes was very slow on entry on many laps, and they went into lap two 0.073 seconds apart.

Spiezia reclaimed the lead on the run to turn one, but then Hawes was back ahead a few corners later. Spiezia had a better run into the first chicane and led again, but over the crest Hawes was ahead. They went side-by-side into Villeneuve, then also at Bolderbergbocht and ran all the way to the final chicane where the inside line gave Spiezia the lead.

Hawes dived down the inside at turn one on lap three to get back by, but again Spiezia reclaimed the lead. Hawes passed again before Villeneuve, and there was more jostling through the final corners but Hawes stayed ahead.

ERA technician Christiaan Spielmans and de Laet got involved in the lead fight on lap four, passing Spiezia at the start of the lap. Hawes’ early deceleration into Villeneuve dropped him to third there, putting de Laet into the lead ahead of Spiezia until the latter tucked out of his slipstream at the end of the lap to move ahead by 0.007s.

Hawes reclaimed second at turn two on lap five, and at the same corner two laps later passed Spiezia. The Villeneuve entry this time backed Spiezia into the cars behind when he could have gone for a move, giving de Laet the chance to attack for second place again before the final lap.

A gap of 1.472s existed between the top two going into the final tour, but by the chequered flag the margins were smaller and larger. Spiezia mysteriously dropped 13s and finished fourth, while Hawes [in a different car to the one pictured above that he drove in testing as it had a water pump failure] backed off at the line and only finished 0.055s ahead of de Laet.

“I don’t know what happened, I really don’t. The car felt amazing, I’d like to thank the team,” said Hawes, who was called up to race at 10pm on Thursday night ahead of pre-event testing on Friday.

Bob Stevens finished a surprise third on his first experience of single-seaters, crediting the result to temperature management early on.

Spelmans lost 22s on the final lap and fell to last place behind Michelangelo Amendola, who set the fastest lap in clear air after spending most of the race alone at the back.