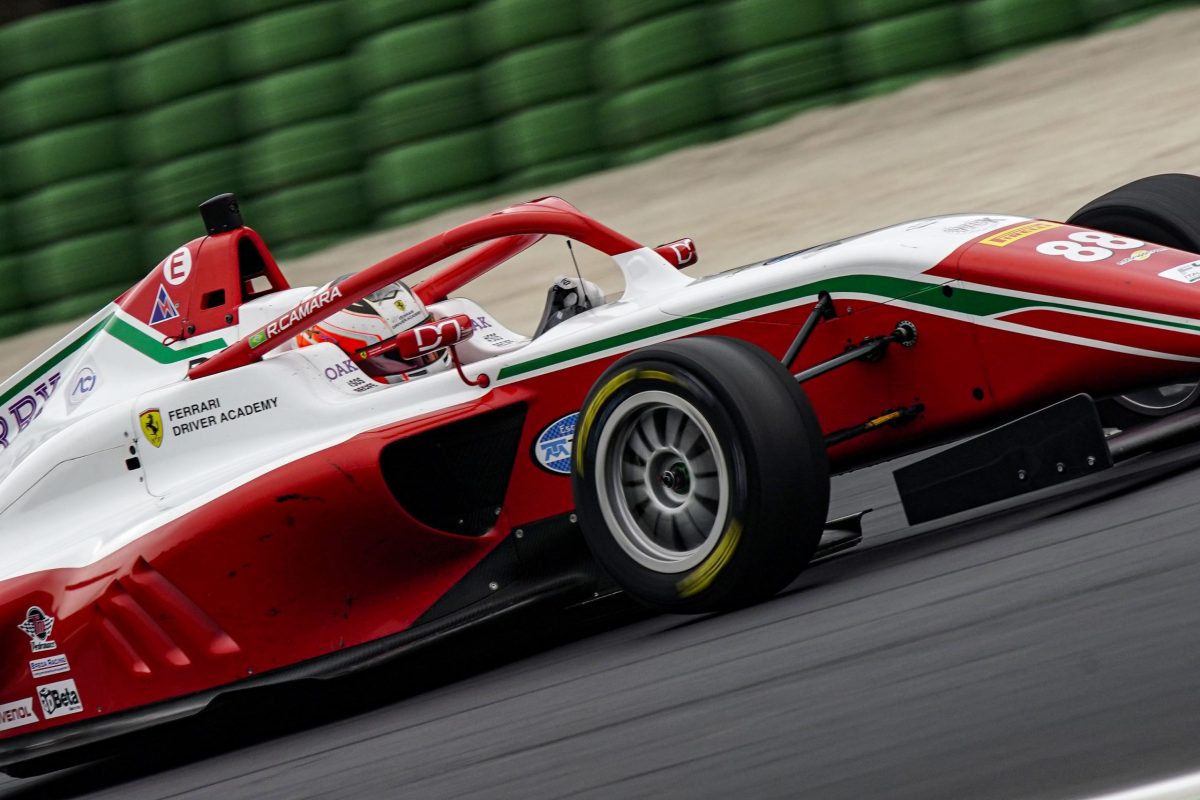 Antonelli started on pole and led for the majority of the race, deflecting an attack from Camara through the opening corners and then building a cushion between himself and his team-mate until the safety car was called out in the second half of the race due to an incident involving Van Amersfoort Racing’s Jules Castro and BVM Racing’s Kim Hwarang.

At this point Charlie Wurz, but was being chased down by Alex Dunne, and PHM Racing’s Nikita Bedrin had been making use of fresh tyres to climb up the order to fifth.

Bedrin attacked Dunne and Camara attacked Antonelli at the restart, with Camara managing to get alongside into the second corner and then taking the lead from Antonelli at the third. Dunne meanwhile got Wurz before turn three and started attacking Antonelli as Barnard tries going down the inside of Wurz.

The first casualty of the squabbling was Dunne, whose front wing flew into the air, then Wurz’s suspension broke and Bedrin, who was right behind him, ended up going off the track behind the squirming Prema entry.

Somehow Dunne was then on the next straight able to pass Antonelli, and behind them Iron Lynx’s Maya Weug got in the fight and Wurz’s car flew off track. Dunne remarkably kept second until the final sector of the lap, with Marcus Amand – who early in the race had gone off and dropped outside the top 10 – was now fourth ahead of Kacper Sztuka, Weug and Conrad Laursen.

Camara crossed the line with a second to go, meaning there would be two more laps of the race, and there was now two more cars in the fight for what was now seventh as Dunne valiantly drove on. Weug was in the thick of that fight, having lost her front wing too.

Dunne dropped to ninth before the final lap, with Arias Deukmedjian and Taylor Barnard getting ahead and the latter trying desperately to pass the former, while Weug was trying to hold on to a position outside of the points when she went off the track and returned across the front of two other cars.

As another two then approached it resulted in Jenzer Motorsport’s Ethan Ischer riding over the front of R-ace GP’s Marcos Flack and then into the side of Weug, whose car then went irborne and across the track again, obliterating PHM’s Victoria Blokhina. Others got caught in the melee and the race was immediately red flagged, with the results going back a lap to decide the order. All of the drivers involved were able to swiftly depart their cars.