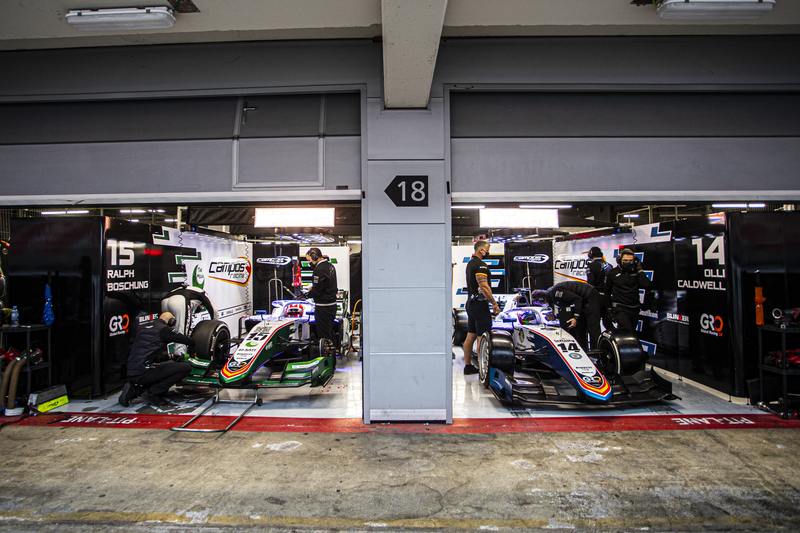 Olli Caldwell has revealed that having Ralph Boschung as team-mate influenced his decision to join Campos Racing in Formula 2 this year, and detailed the impact of Boschung’s injury-induced absence.

Boschung has been at Campos on-and-off since 2017, contesting the majority of that year’s F2 season then returning to the team for the 2020 season finale not long after he signed to race full-time in F2 for the next year.

Before that season was done he had already committed to another year with Campos, and Caldwell joined as his team-mate for the final in the Middle East then was announced for 2022 in February of this year.

“It was really unfortunate what has happened to Ralph. He has had this injury, which was very sudden and unexpected. I really hope that the injury that he has can be fixed, so he can get back to racing and hopefully finish the season,” Caldwell said of his usual team-mate, while he is currently partnered by Roberto Merhi due to Boschung’s prolonged neck injury.

“One of the reasons I’ve signed for Campos [for 2022] was Ralph was going to be here. He’s a very experienced driver, so it was great to have an experienced reference in the other car as a rookie to show what the car can do.”

Boschung has only been able to contest half of the 16 races held so far this season, and had been the sole contributor to Campos’s points tally until the most recent round at the Red Bull Ring where Merhi made the podium and Caldwell scored.

“So, to miss him for those few rounds was really tough not having a reference,” Caldwell added. “There were some new circuits I’ve never driven at like Monaco, Baku. It certainly didn’t help me and I don’t think it helped the team morale either.”

Caldwell expanded on that point, adding: “First of all, to have a team-mate come in for the full weekend [last time out] was a morale boost in itself, and then for both of us to achieve very good results has obviously brought the team really back up to where we were before. The whole team feels great, we’re all looking to keep improving and keep doing these results more often, and hopefully that’s what we’ll do.”

However there is a bit of tension for the rookie, as his “main focus” in the Paul Ricard round this weekend will be “not getting that one [penalty] point” as he is one penalised infraction away from a race ban.

“I don’t entirely agree with what those points were given for, but I can’t change it. So, just trying not to get any extra ones.”