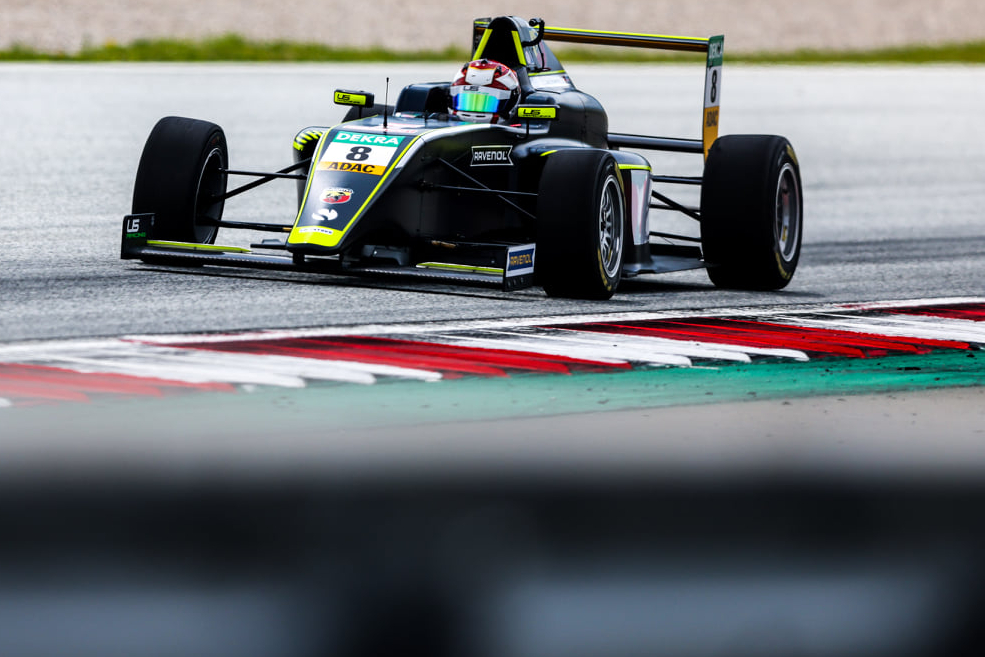 Reigning British Formula 4 champion Luke Browning took a first ADAC F4 win in the third race at the Red Bull Ring, although he finished second on the road.

The front row starters made the best launches, with Montoya slipping down the inside of Bernier to take the lead at the first corner, while Browning collided with Van Amersfoort Racing’s points leader Ollie Bearman at the Remus right-hander.

The top three broke away but then on lap two the safety car was called out after R-ace’s Marcus Amand stalled following a spin, reducing the gaps at the front to nothing. That became particularly significant as it was announced Bernier and Montoya had both jumped the start and would therefore recieve five-second penalties.

Bernier reclaimed the on-track lead on the restart lap, with his move at the downhill Gosser right-hander also allowing Smal into second. Montoya got back past two laps later, then returned to first place the lap after that by clearing Bernier.

Now it looked like Bernier would drop to third, with Smal attacking around the outside of Remus on the next lap. He couldn’t quite get ahead, but tried the same at Remus. Bernier gave him little room, the two collided and Smal sank down the order as he lost his front wing. Bernier also copped a drive-through penalty, meaning US Racing’s Tim Tramnitz was now the effective leader behind Montoya.

Montoya drove calmly and was on course to get his lead up to five seconds, while Tramnitz had his chances blown with a few laps to go as a wide moment out of the final corner allowed team-mate Browning through and then led to Jenzer Motorsport’s Francesco Braschi rear-ending him and taking off his rear wing.

Remarkably Tramnitz was able to stay on the pace of those around him, but a safety car period was required to retrieve his rear wing. Montoya also overcooked the final corner when it came to the restart, allowing Browning and Braschi ahead.

He recovered though and past both in the final two laps to cross the line first, but was dropped to eighth by his penalty. That became seventh when post-race Braschi was handed the equivalent of a drive-through for hitting Tramnitz – who was shown the black-and-orange flag and had to pit – and VAR’s Cenyu Han and Nikita Bedrin ended up on the podium with Browning.

After much battling behind, Iron Lynx’s Leonardo Fornaroli was shuffled down to 11th at the end, two spots ahead of Bernier, while a collision with team-mate Joshua Dufek meant Bearman retired but is still points leader.