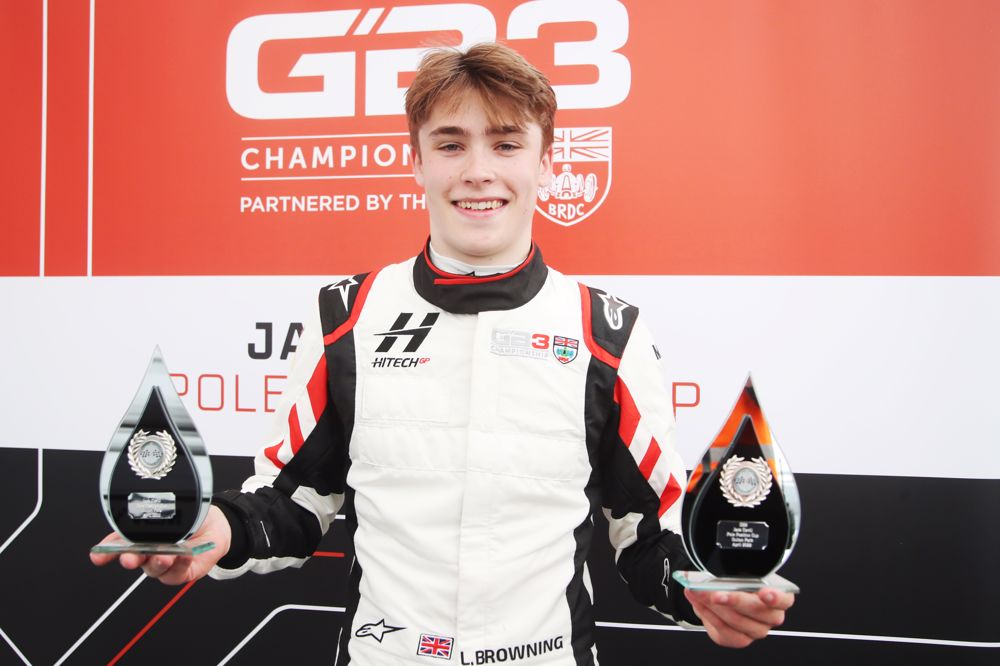 Hitech GP’s Luke Browning said he needs “to keep pushing” after making a “positive” start to his GB3 campaign at Oulton Park.

Browning took two dominant lights-to-flag wins in the opening round, but retired from the reversed-grid race due to a collision, and leads the standings by seven points from Carlin’s Roberto Faria.

The triumphs were extra special for the 20-year-old, who has won in Ginetta Junior, British Formula 4 and on his GB3 debut at the end of last season at his local circuit. He used his home advantage again to beat Faria by a huge 10.2 seconds and 8.9s.

“The team has put in so much work, it’s so nice for it to pay off like that,” Browning told Formula Scout.

“I enjoy racing around my home circuit. There’s something about that home magic that brings it alive. And with everyone here, probably about 50 people down here today coming to watch, it’s nice.

“I knew that was the most important thing – qualifying and the start. It really was just controlling it [from there].”

The 2020 British F4 champion joined Hitech in winter, contesting two F4 United Arab Emirates rounds to help the team get on top of a new car, and then doing the same in tests once Hitech took the delivery of the 2022-spec GB3 machine.

That hard work paid off at Oulton, but despite the good start there is no expectation that it will be easy to maintain the form of three wins from his first six GB3 races.

“When you’ve got a car like that it comes so easy and it’s natural, so I think the guys did a smashing job and I can’t thank them enough really,” he added. “The resources, the people, the management is amazing. I get on really well with the guys here.”

“It’s just, how long will it last? We’ve just got to keep pushing, it’s always difficult to stay at this level.”

The weekend ended on a bit of a dampener for Browning, who retired from race three with suspension damage after contact with Elite Motorsport’s Tom Lebbon approaching Hislop’s chicane. Lebbon was disqualified after being deemed at fault for the clash.

“We’re leading the championship, obviously less than I’d like it to be, but hey-ho, it is what it is. Onwards to Silverstone, I’m sure we will do just as good a job.”