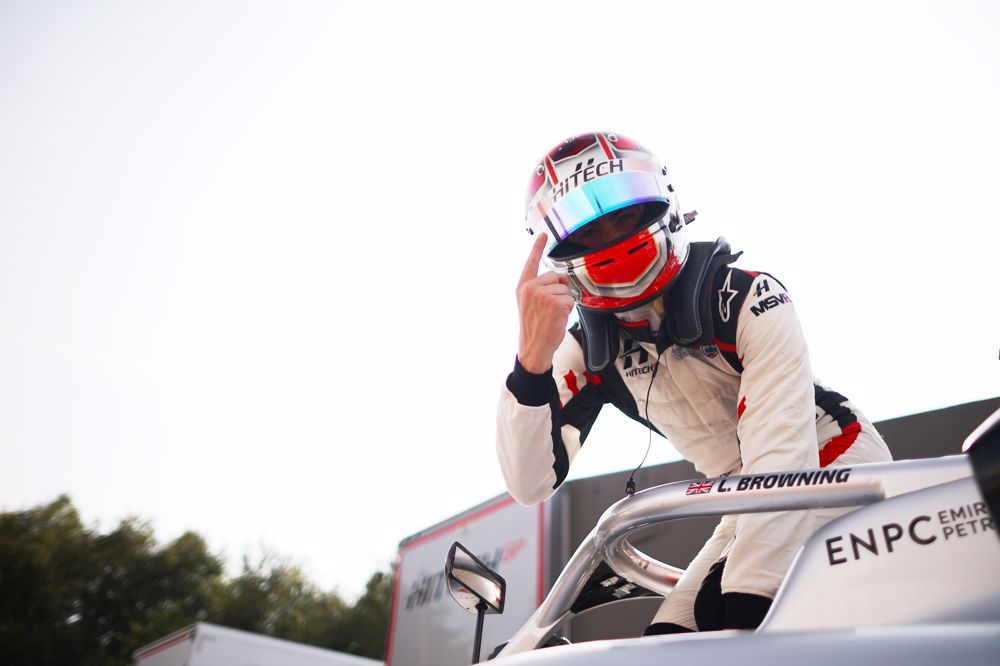 Luke Browning converted pole into victory in the opening GB3 race at Spa-Francorchamps, although he did initially lose the lead.

The Hitech GP driver was passed by title rival Joel Granfors down the Kemmel Straight on the opening lap, and Chris Dittmann Racing’s Branden Lee Oxley passed two cars to get into fifth before the safety car was summoned due to a big crash on the straight downhill from La Source.

Three-way contact immediately put Arden’s Nico Christodoulou and new JHR Developments signing James Hedley out of the race, while Arden’s Alex Connor had to head to the pits, and drivers went through the endurance pitlane on the next lap as the crash was cleared up.

There was drama just after La Source again when racing resumed on lap three, as Bryce Aron went down the inside of McKenzy Cresswell for seventh place but then the pair made contact and Cresswell lost his front wing. Meanwhile Browning lined up Granfors for the lead and got alongside down the Kemmel, getting squeezed to the inside but still making it through.

From there he was untouchable, pulling away by almost a second per lap to finish 6.095s clear and extend his championship lead.

Browning’s team-mate Cian Shields passed Douglas Motorsport’s Max Esterson for third exiting Eau Rouge on lap three and he then settled into that position, but a five-second track limits penalty meant he was dropped to seventh at the finish.

Oxley and Carlin’s Javier Sagrera passed Esterson very shortly after Shields did, and Oxley did actually get by Shields at the last corner on lap three but they swapped places again on lap four.

Esterson started coming under attack from Hitech’s Bryce Aron, but going into the second half of the race he upped his pace, passing Sagrera around the outside just before Les Combes and chasing Oxley back down but finishing just 0.237s short of what would become a podium position.

Elite Motorsport’s Tom Lebbon also finished ahead of Sagrera as he went around his outside at Les Combes on the penultimate lap and did get through before a big front-right lock-up sent him off the track. He returned to track ahead and kept the position.

Aron finished ninth after being passed by Carlin’s Callum Voisin on the run to the finish.