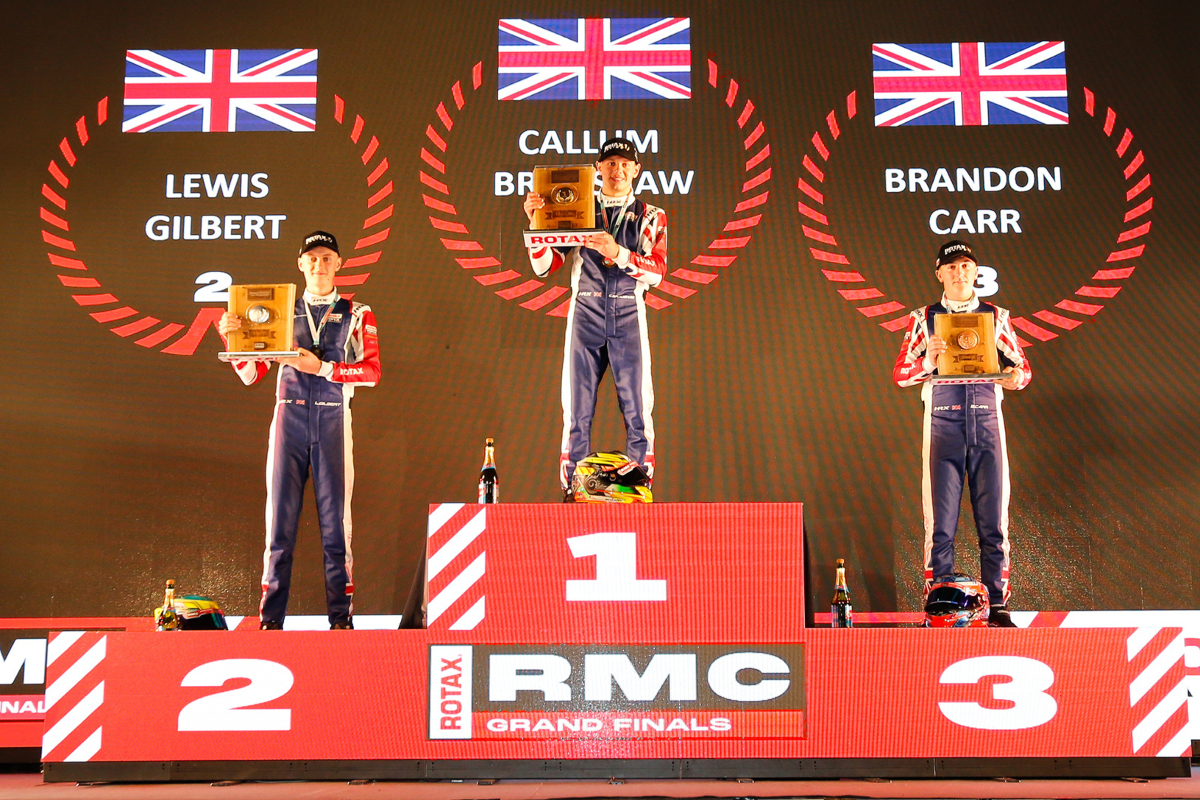 The Rotax Max Challenge Grand Finals capped off a super competitive 2022 season, but the fight to win the Rotax Senior element of the event was marred by incidents between Britain’s illustrious contenders

At multiple points this week at Algarve, it looked like Team UK’s drivers would fill the top five positions in the most illustrious of all the categories at the Rotax Grand Finals: the Senior race.

While racing for some of the top teams in karting, drivers across the 72-strong entry list were also representing countries and there was some star additions including Formula Regional European Championship’s Eduardo Barrichello, former GP3 racer Akash Nandy and Team Canada scholar Kevin Foster. And of course some of the biggest names in senior karting right now.

Rotax Max Euro Trophy champion and Euro Golden Trophy winner Sean Butcher was one of the favourites, and was driving for his usual KR Sport team.

“So we still run under KR Sport but as a part of Team UK,” he explained to Formula Scout. “So there is always still the team rivalry but this event always will show who the best drivers are as it was as equal as the karts and engines will ever be.”

Rotax-powered karting is generally considered to have less performance disparity between karts than the FIA’s competitions using OK karts and multiple engine suppliers, and that was proved during the week with pack races where drivers down in 20th place were as fast as the leaders.

The week in Rotax Senior started with France’s Ethan Pharamond setting the pace in qualifying, with Butcher topping his group to be classified second overall. Next up were Rohaan Madesh (India), Zsombor Kovacs (Hungary) and last year’s Grand Finals runner-up Kai Hunter, then 2020 CIK-FIA World Karting champion and 2021 Rotax Euro Trophy champion Callum Bradshaw was down in 14th overall and Lewis Gilbert in 22nd. 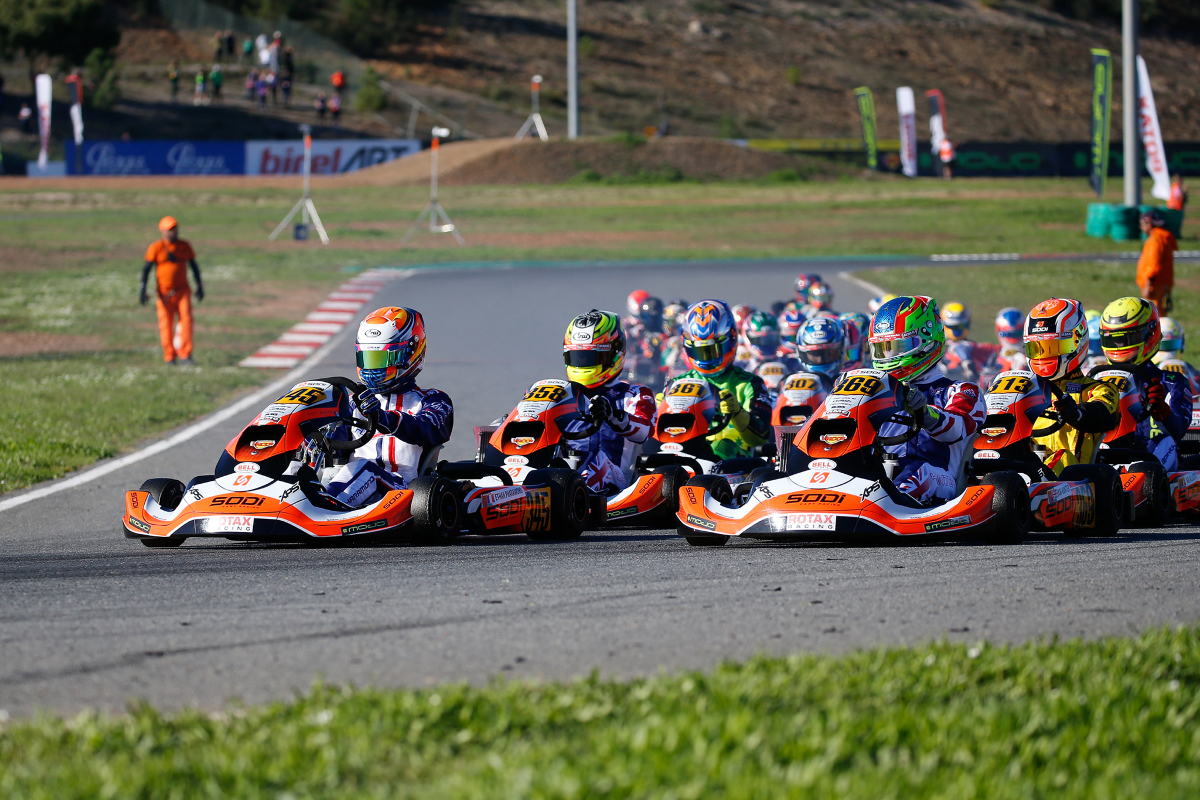 There was a lot of rivalries being carried over, with Bradshaw having pipped Hunter to be British Karting champion this year, while Gilbert and Hunter had also been Butcher’s close rivals in the Euro Trophy.

Butcher brought home the first heat race win, with Hunter in 10th and Bradshaw a penalised 11th after a front fairing penalty knocked him from third, while Euro Trophy runner-up Kai Rillaerts won the second race of Wednesday.

Hunter started Thursday with a heat win, with Bradshaw rising from seventh to pip Butcher for victory in the next race. The pair repeated their triumphs in their third heats, but the day’s second round of the Bradshaw-Butcher battle ended with a collision.

Butcher started from pole for the final heat, with Bradshaw seventh on the grid. He made no progress on lap one, but jumped to third on lap two and then Miska Kaskinen and Bradshaw slipped down the inside of Butcher at turn two on lap three.

Kaskinen was driving rather messily in the lead, and on the next lap the door was left at open at turn one. Bradshaw was on his inside, and Butcher was on the inside of Bradshaw too, so completed a double move by turn two to reclaim the lead.

Bradshaw got loose and dropped to third behind Paraguayan Alejandro Samaniego, who hit the rear of Butcher as the front of the field started to congest. There was a lead group of at least eight going into the race’s second half, and Bradshaw passed Butcher on the outside under braking for turn two on lap eight of 10 to get back ahead.

They went into the penultimate lap a tenth of a second apart, and now with 10 drivers right on their tails. It got too close for comfort on the final tour, with Bradshaw drifting right to the middle of the road down the pit straight.

Butcher went even further right, managing to get halfway alongside on the run to turn one. But Bradshaw then moved across further and they made contact. The rear of Bradshaw’s kart jumped into the air while Butcher was sent spinning. Samaniego tried to avoid his out-of-control kart on the outside but was collected, ending both of their races in quite violent style. 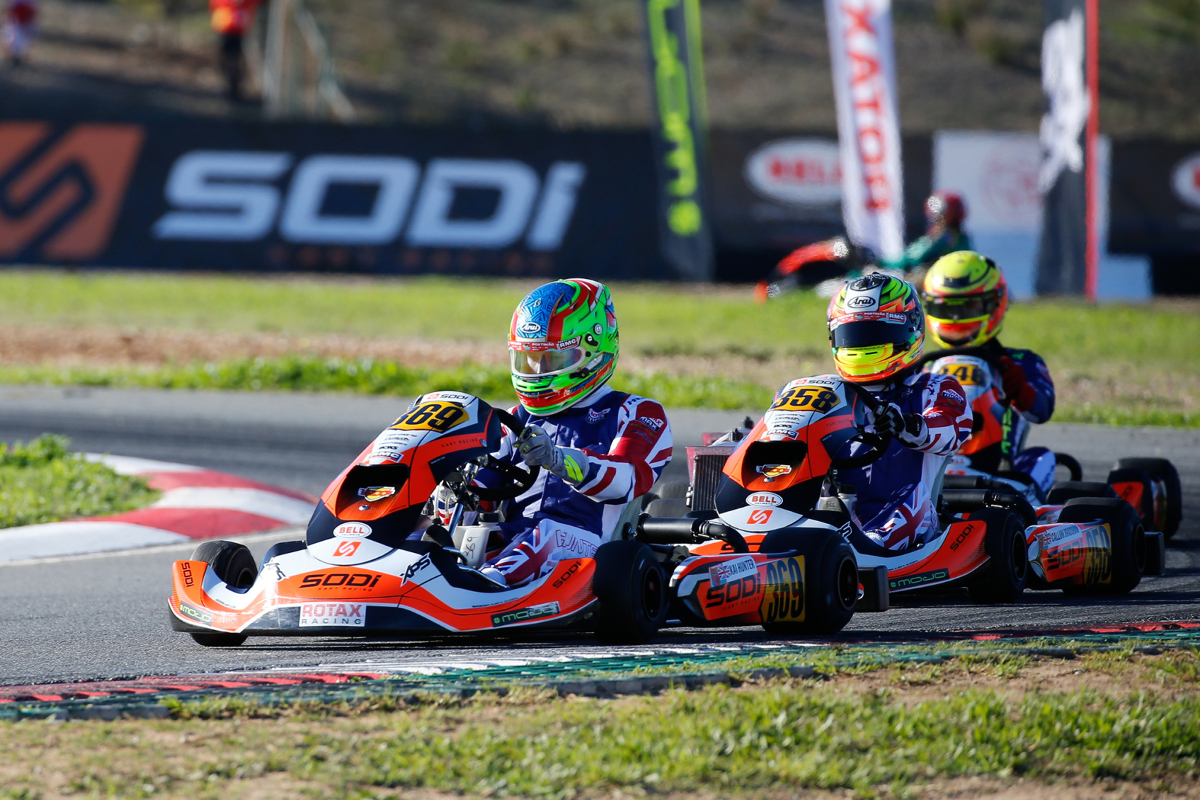 Remarkably Bradshaw’s kart was neither penalised for or his kart damaged by the incident and he won ahead of Madesh and Gilbert, who predicted more on-track agression in the races ahead.

“To be honest I’m still not sure what happened, all that I know was that there was a clear gap so I went for it,” Butcher said of the clash. “At the end of the day I had it all to lose, so it would’ve been stupid of me to go for a move that wasn’t on. I definitely believed that the move was on.”

Pharamond topped the intermediate classification ahead of Kovacs, Hunter, Gilbert, Bradshaw and Kaskinen. Butcher’s retirement put him 17th, just behind team-mate Brandon Carr who was making his second appearance in senior karting after winning the British Karting Championship for Rotax Junior karts.

The favourites were still able to do battle in the first pre-final on Friday, with Hunter passing Bradshaw to win and with Butcher and Barrichello finishing just behind them in third and fourth.

Carr then climbed from eighth on the grid to win the second pre-final, edging Janne Stiak.

The combination of those results with the heats formed an updated intermediate classification and the grid for the final, with Hunter and Bradshaw sharing the front row. Behind them were Gilbert, Kovacs, Stiak, Pharamond, Rillaerts and elated karting returnee Barrichello.

Carr was 10th and Butcher was 12th, and Samaniego missed out on the final entirely.

Hunter, Bradshaw and Kovacs broke away in the opening laps, with Bradshaw taking the lead on lap four of 21 but Hunter reclaiming it next time by. 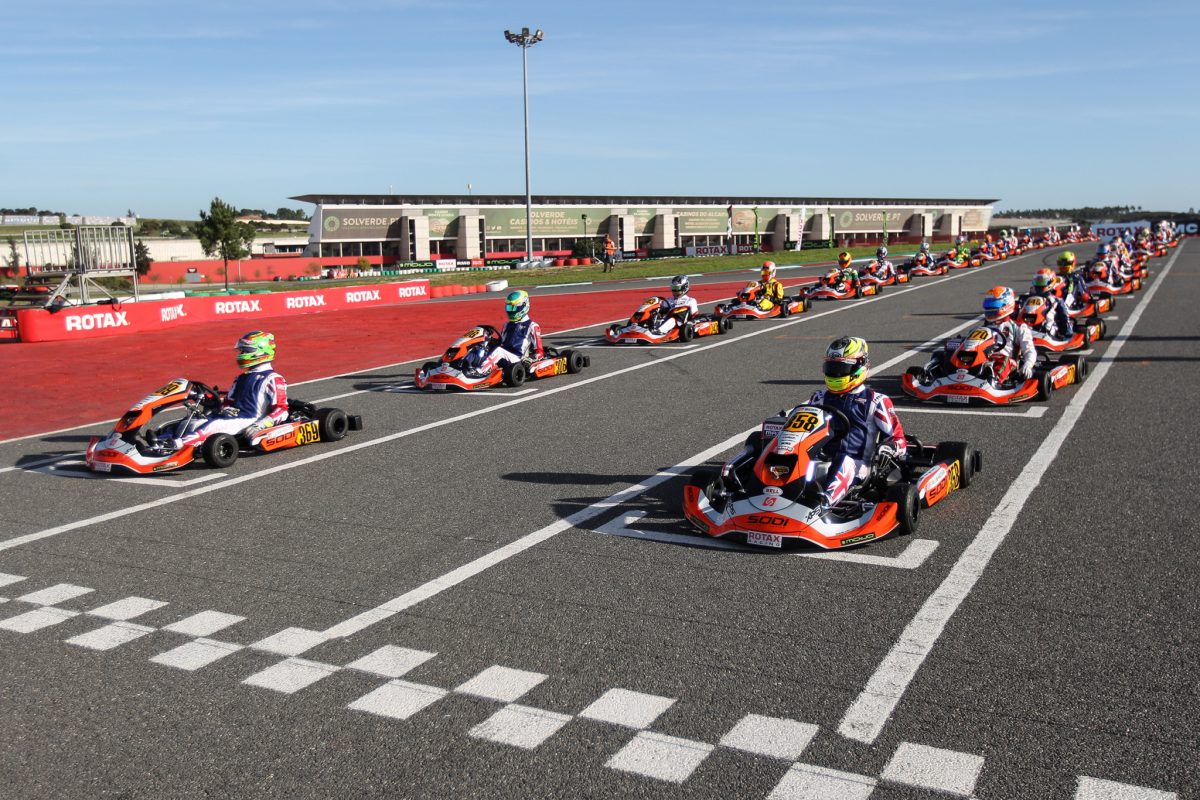 Bradshaw got back by on lap seven, with Kovacs aggressively going past Hunter too which enabled Stiak to close in.

Behind the top four, Butcher got to the front of the group battling for fifth and he set the fastest lap on lap 11 once in clean air. He had turned it into a lead group of six as Hunter passed Bradshaw again, and then the drama started to escalate.

On lap 16, Bradshaw went to pass Hunter on the inside on the short straight between the first two turns. Hunter cut across and forced him onto the grass, and Bradshaw slipped initially back to third behind Butcher as he rejoined the track.

Butcher was the driver on the attack and he started pressuring Hunter for the lead, with a gap to third appearing as Carr got into a podium position by passing Kovacs but then the Hungarian passed him back at turn 14 and it held everyone behind up.

With three laps to go Kovacs led Gilbert and Bradshaw in the fight for third, with the next group just behind consisting of Carr, Rillaerts, Barrichello, Stiak and Giuliano Raucci.

The next flashpoint came as Kovacs defended hard against Gilbert after turn one and almost pushed him off.

Despite this, Kovacs was closing back in on the top two. On the penultimate lap he defended hard again but then left the door open at turn nine, the second part of a twin-apex hairpin, and Gilbert tried going down his inside.

Bradshaw simultaneously snuck down the inside of both to emerge in third, and Kovacs was soon sent spinning down the order as Raucci rear-ended him at turn 11.

Hunter began the final lap half a second clear of Butcher, with a further 0.9s to Bradshaw and Carr.

Carr attempted what could have been a race-winning move on Bradshaw around the outside of turn three but ended up leading to both running very deep and allowing Gilbert to get back into fourth at turn four. 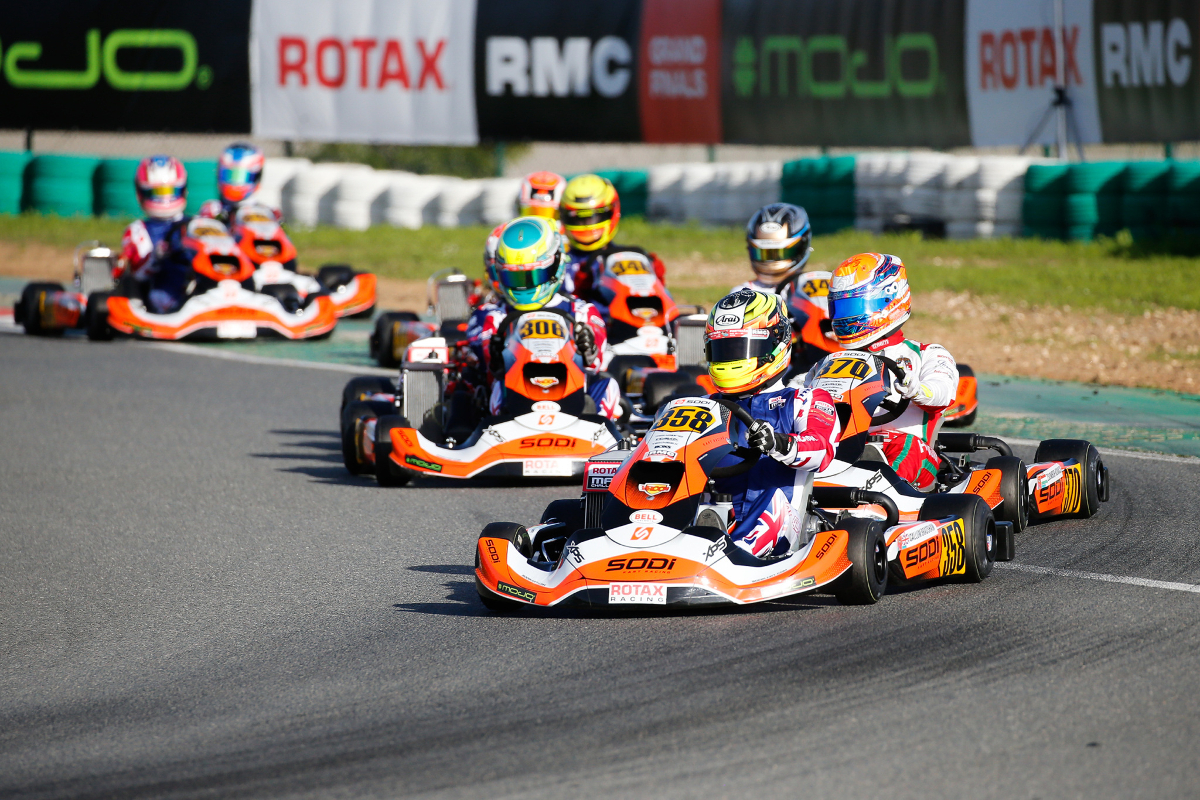 But they then both went wide through the corner and Gilbert on the outside briefly went off. As he rejoined the track he slid slightly, almost knocking Carr but avoiding contact.

That gave Bradshaw crucial breathing room through the final sector to secure third, while Hunter and Butcher’s battle didn’t get close enough to lead to an overtake and Hunter did what similarly successful brother Rhys has never managed to do by winning the event.

“It was absolutely amazing. It’s so hard to break the tow around here because it’s so strong, but went into – when Cal started defending I thought it was game on,” Hunter said once he hopped off his kart.

“Did him around the outside here, and then I think that was game over from then.”

But when it came to the prize-giving ceremony, it was Bradshaw, Gilbert and Carr standing on the podium.

Hunter was penalised five seconds for breaching the code of driving conduct and the general prescriptions on lawful defence with the move that put Bradshaw on the grass, while Butcher recieved a front fairing penalty despite avoiding contact through the final.

“In the final I knew I would have a lot of work to do,” said Butcher.

“However from the middle of the race I was so fast, I knew that the front pack would end up fighting so I was still comfortable enough to manage my tyres which helped me pull off some of the moves that I did later in the race.

“Also when I saw Callum on the grass I thought there would be a potential penalty for Kai. 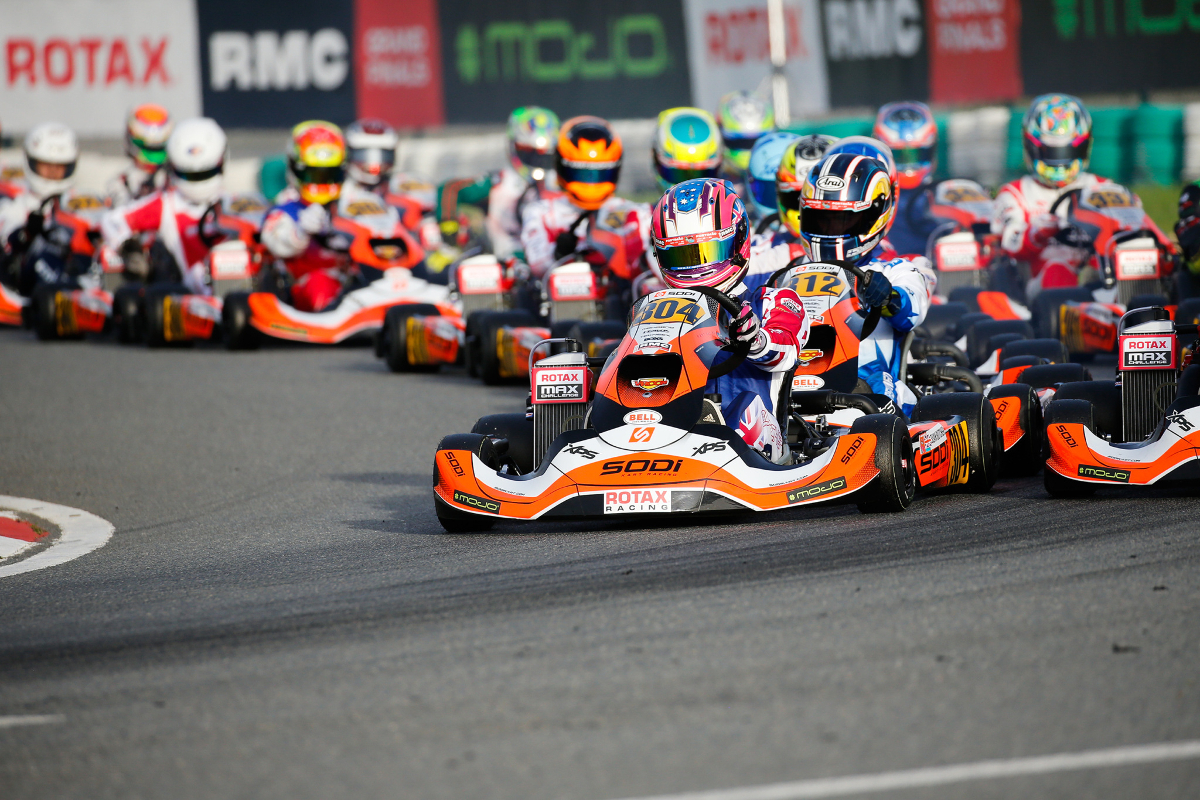 “My penalty in the end was for front fairing, however it was because the clamp had snapped,” he revealed.

“Whilst the bumper was still in correct position. This caused it to not only go in, but move position and actually get caught underneath my front wheels which is what gave Kai the gap [at the end]. It was a very unfortunate result due to it being nobody’s fault except a part failure

Hunter and Butcher were knocked down to 10th and 11th, while Raucci got a 10s penalty for his collision and was dropped from sixth to 21st place.

Rillaerts and an elated Barrichello moving into the top five as a result, with Stiak sixth and Lemeray being classified seventh after starting 25th.

It was a historic result for British karting, but the top five lockout was denied by a moment where the victory meant too much. And for two of the contenders, there is now a crossroads of where to go next in their racing career.