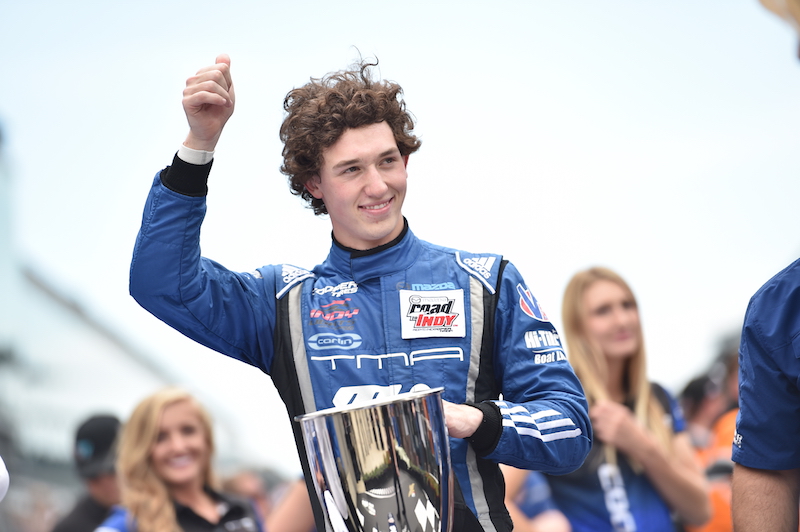 He will form an all-Brazilian line-up with IndyCar veteran Tony Kanaan at AJ Foyt Racing.

Leist, a British Formula 4 race-winner in 2015 and the 2016 British F3 champion, switched to Indy Lights this season and won three races with Carlin.

The first of these wins came at Indianapolis Motor Speedway in the Freedom 100, which Leist dominated despite having no prior oval racing experience.

He won again at Iowa Speedway, and could very well have done so at Gateway Motorsports Park had he not got a late puncture during a caution period.

His only road course win came at Road America, where he won by over six seconds.

Rather than do another season Indy Lights, and improve on his fourth placed finish in the standings, Leist has decided to step straight up to IndyCar.

At 19 years old, Leist will be the youngest driver to appear on the IndyCar grid since Graham Rahal and Mario Moraes in 2008.

?This is a special moment in my career,? said Leist.

?Sometimes it is hard for me to believe that I?ll be driving for the legend AJ Foyt.?

?Having Tony Kanaan as my teammate is incredible because he?s been an idol for me since I was a child. Tony and I are from different generations but I can?t wait to be with him at the track and learn as much as I can from him. It will be a pleasure.?

Team principal AJ Foyt said. ?I wanted a fresh start for 2018. I think the combination of an experienced driver like Tony and a hungry young driver like Matheus will work. I watched him in the Indy Lights this year and he won at Indy. I know he?s got a lot to learn, but I think he?s going to learn very quick and I think he?ll be very good in the Indycar.?

Leist’s departure from Carlin, allied with the team’s announcement that it will be returning to Formula 2 next season, puts increased doubts over its planned IndyCar programme.