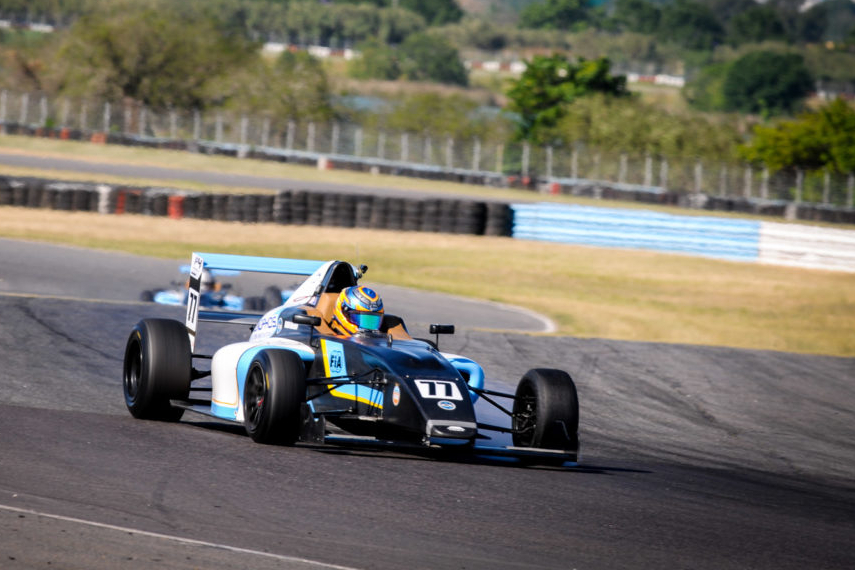 The Argentinian Formula 4 championship concluded its inaugural season with a double-header at Autodromo Oscar Cabalen, where both races were won by Braian Quevedo.

The series’ usual frontrunners were outdone in qualifying by newcomer Valentino Mini, who had made his F4 debut last month in NACAM F4’s Mexico City Grand Prix support race and took pole at Oscar Cabalen by a slim 0.144 seconds over Pablo Collazo, with Figgo Bessone just 0.048s slower than that in third.

Federico Hermida, who was crowned champion in the penultimate round, failed to set a representative laptime and so qualified seventh for the first race of the weekend.

Quevedo was quick to move from fifth on the grid to be Mini’s closest rival though, but it took a long time for him to break the Panamanian’s defences. He eventually got through after 12 laps, and threw Mini into the clutches of Bessone who had stuck with them throughout.

In the remaining laps Quevedo edged away to win, while Mini took second ahead of Bessone. Hermida could only finish fifth, getting stuck behind Mateo Nunez while the top three pulled away.

It was redemption for Quevedo, who in the previous round at Buenos Aires had claimed his first on-the-road win but had it taken by a 30-second penalty for a move on Hermida.

Quevedo and Mini shared the front row for the season-ending race later on Saturday, and again battled closely for the win. Argentinian Formula Renault 2.0 race-winner Quevedo was able to add another F4 success, while Hermida finished a far more satisfying third place to conclude his successful season.

Despite only contesting the final round, the double points on offer meant Mini jumped to eighth in the standings.