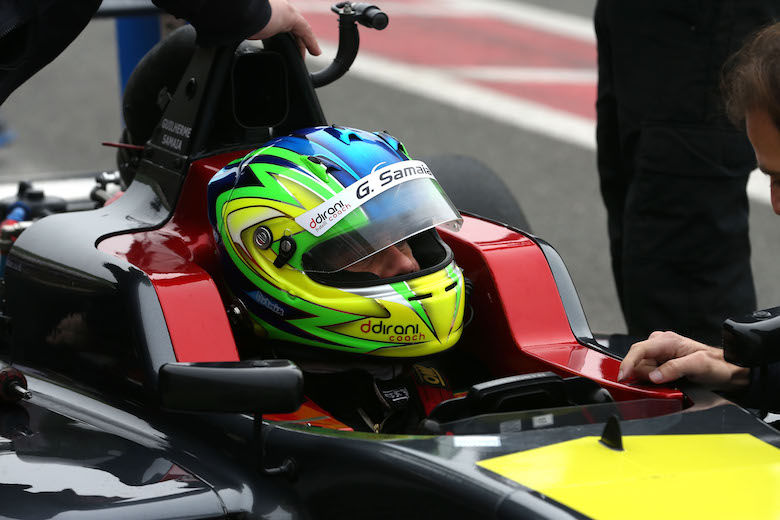 The 20-year-old joins the team that took compatriot Matheus Leist to the 2016 crown, and is?similarly coached by Danilo Dirani who won races in British F3 in 2004-05.

Like Leist, Samaia is a champion in?the secondary ‘Light’ division of Brazilian F3, winning that in 2015 before stepping up to the overall category last year and placing second behind Matheus Iorio. He won the opening race of the 2017 season at Curitiba last month.

?We’re delighted to have completed a deal with Guilherme to join the team, he did a good job at the Media Day test [at Snetterton last month] and he’s more than proven his ability in Brazil,” said team boss Anthony ‘Boyo’ Hieatt.

“He’s been brought over to the UK by Danilo Dirani, who we obviously know very well indeed and have worked with a long time, and we’re all quietly confident Guilherme will make strong progress with Double R.”

Samaia added: ?I’m really happy to have joined Double R Racing. I feel I have been taken into the family with a warm welcome and have 100% trust in the team as they worked last year with my coach Danilo Dirani, who then coached last year’s champion Matheus Leist.

“I used to, and still am at the moment, race in Brazil with the Dallara F308 car and now I face an entirely new challenge with the British F3 car. I have quite a lot to learn, it’s my first time in Europe and the tracks, the car and climate are all new to me.

“The team is helping me to adapt fast, due to my late arrival in the UK at the end of March, and I’m confident we will be strong.”