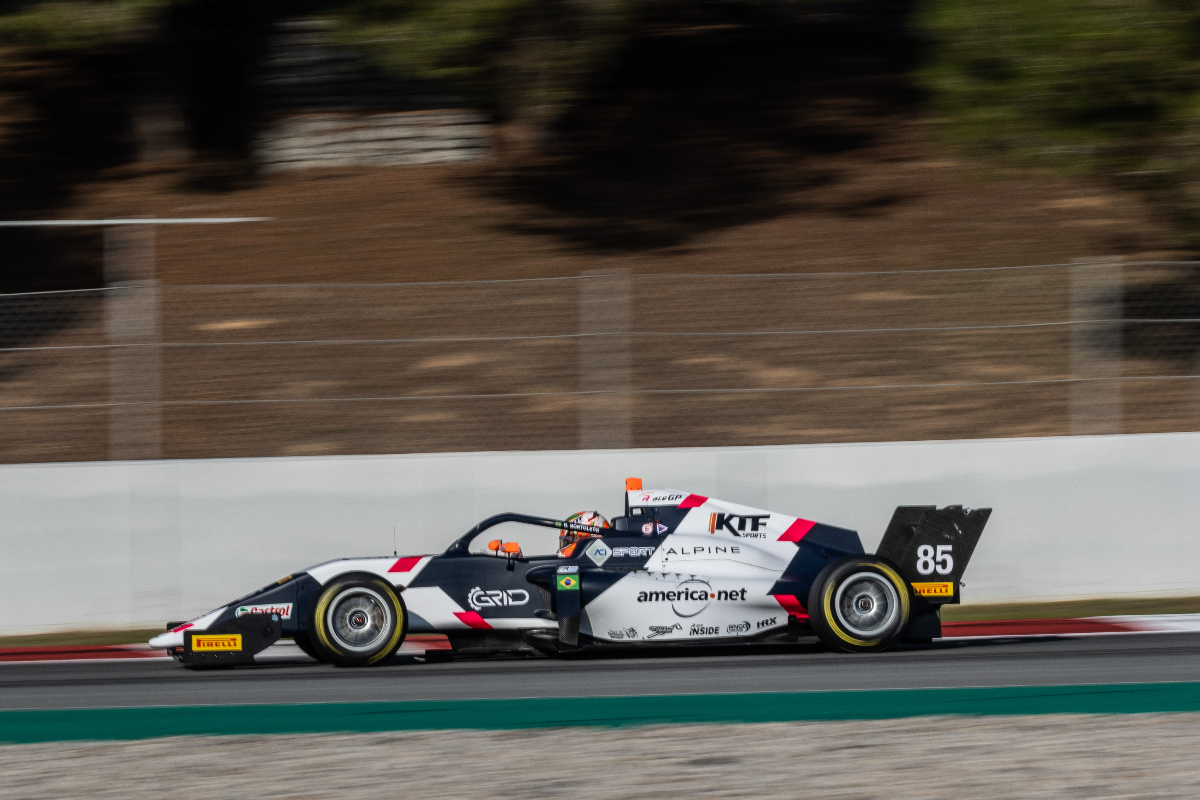 David started right behind poleman Bortoleto, but drew alongside his team-mate after passing the slow-starting Pierre-Louis Chovet for second place off the line. Behind them, Kas Haverkort tried squeezing himself between Paul Aron and Owen Tangavelou, riding over the rear wheels of Aron and striking Tangavelou in such a way that he had to retire.

Tangavelou’s stricken car led to the safety car being called out, with MP Motorsport’s Dilano van’t Hoff at the back of the order after he was spun around at turn one.

Bortoleto made a great restart to race away and build a lead of 1.338 seconds, but that started to shrink as the race went on and the tyres heated up. The pair traded fastest laps as the gap decreased, and on lap 11 of 17 a powerful slipstream enabled David to get onto the rear of Bortoleto and then alongside him as they headed down to the first corner.

Bortoleto defended the inside line to stay ahead, and a little more breathing room on the next lap. David then attacked again the lap after, and their battle was only stopped when the safety car came out with four laps to go.

Victor Bernier, who had fallen from eighth to 14th after the first safety car restart when Prema’s points leader Dino Beganovic swamped him off track into the turn two gravel, was making progress up the order and tried overtaking Beganovic down the inside of turn five. They made contact, damaging Bernier’s car and sending the FA Racing driver into the gravel.

He did not immediately leave his vehicle, and appeared to be in some pain, meaning the safety car period ran to the end of the race and Bortoleto earned his second FREC win.

Chovet finished third for Race Performance Motorsport, although is ineligible for points, and Aron and Haverkort finished fourth and fifth.

Joshua Duerksen met the chequered flag in sixth but is under investigation for not using the turn one escape road correctly when trying to pass Haverkort early in the race. He was followed home by Gabriele Mini, Leonardo Fornaroli, Lorenzo Fluxa and Beganovic.

Joshua Dufek had been behind Fluxa but when he tried to pass him at turn one he went off and did use the full escape road, dropping him down the order.

Beganovic’s championship lead has been cut to 38 points by Mini, with Aron and David still in title contention ahead of the Mugello season finale next week.

Pietro Armanni was given a black-and-white flag for driving standards during the race for blocking van’t Hoff on the pit straight, while van’t Hoff’s MP Motorsport team-mate Sami Meguetounif started from last place after receiving a grid penalty for a paddock altercation after qualifying.