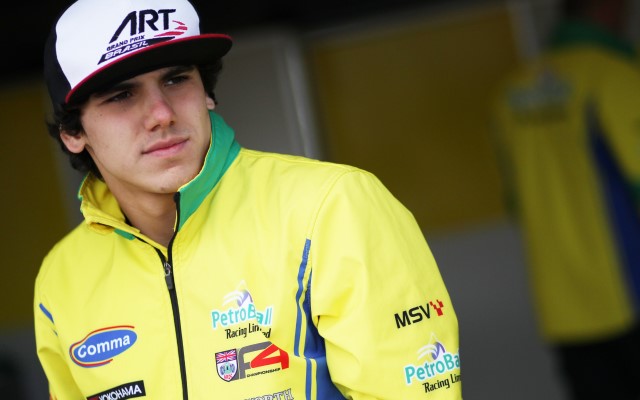 The 16-year-old Brazilian competed in the first four races of the F4 Sudamericana series earlier in 2014, claiming pole for the opening race and scoring two podium finishes.

He has already tested with the PetroBall BRDC F4 team, and been present at recent rounds. The Winter Championship will take place over eight races at Snetterton and Brands Hatch in November.

“I?ve spent some time in England to visit the PetroBall Racing facilities and to see some of the racing, and I?ve been very impressed,” said Bortoleto.

“The structure of the team is very good and the car is nice with a strong engine and a modern paddleshift gearbox. The dashboard on the steering wheel gives a lot of information and the telemetry of the car is really good.

?When I tested the car it behaved very well and it?s great that you can learn car set up in BRDC F4, as it?s very useful for my career development.

?I will race in the Winter Championship to get to know the category and the team. It will be very good and productive for me running alongside my friend Gaetano di Mauro as he already has a lot of experience with the car, which will help me a lot.?

The PetroBall team was set up this year to help young Brazilian drivers make the move to European racing, and its main driver di Mauro is ninth in the standings with a round to go and claimed his maiden win at Brands Hatch in August. The team fielded its second car for American driver Dan Roeper for the first three rounds.

?I am really happy to confirm our driver line-up for the Winter Championship,” said team principal Jose Roberto Sabathe.

“As a team we have progressed very quickly. From starting out at the beginning of the year, we have already taken our first win with Gaetano di Mauro, and I?m sure he can challenge for the Winter Championship title.

?Enzo Bortoleto is a very promising driver who I?m confident can be very competitive in the Winter Championship, and will gain a lot of knowledge from Gaetano?s experience. He will test again at Anglesey before November and I?m very confident that he will join the team for the full 2015 season.?