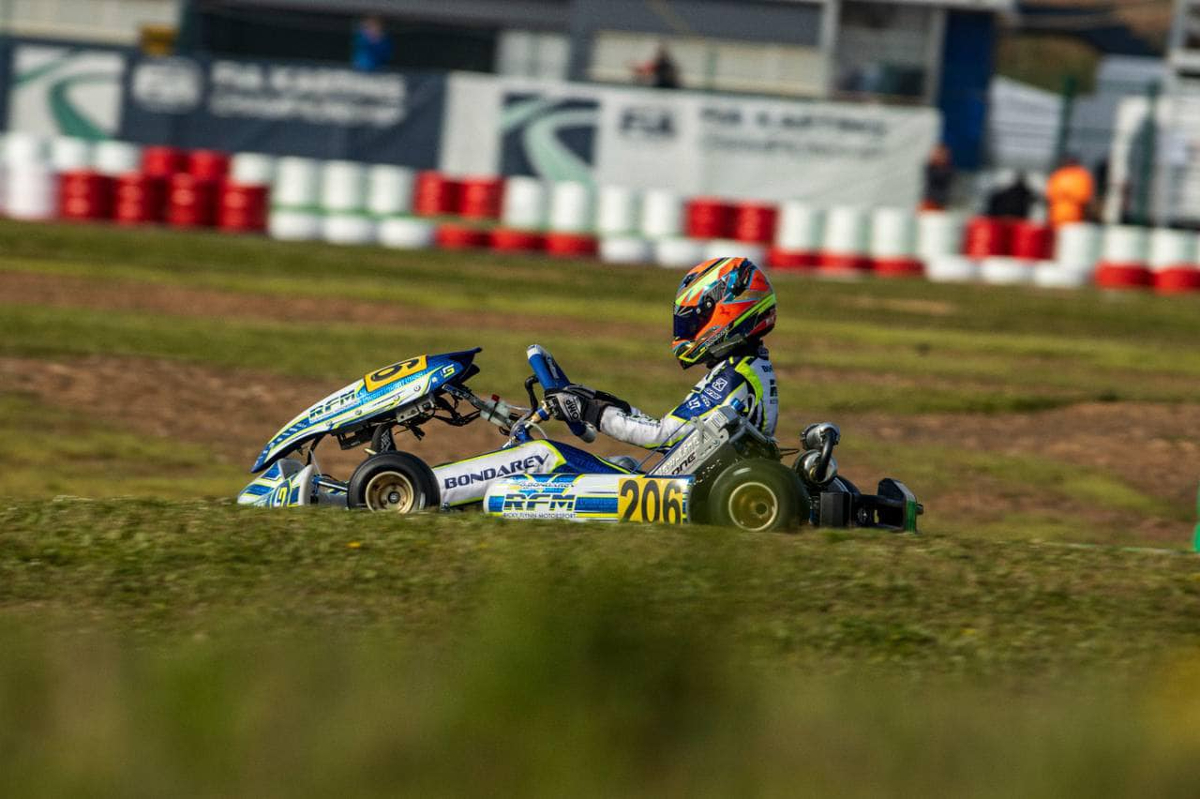 Ukraine’s Sasha Bondarev has broken his leg in a huge double crash in the second round of the CIK-FIA European Karting Championship at Zuera.

Bondarev, who turned 13 last Wednesday, was 10th fastest in his qualifying group and had finished fourth, second, 17th and sixth in his first four Saturday heats. A strong result in the fifth would provide a better starting position for his super heat.

However his last heat started badly, as he dropped to 14th. It took two laps to return to 10th, and on lap four he rose to eighth. Two more drivers were picked off on lap five, and he was attempting a third at the final corner when the first crash happened.

Mateev drifted wide slightly and Bondarev ran over the outside kerb, which led to him getting a little crossed up. As his kart turned slightly to the right, Mateev ran over his front bumper. His kart’s left-hand side went skyward, and the rear-left tyre bounced violently against Bondarev’s head. Both half-spun, and Molnar had already swerved to avoid Mateev before the clash that led to the Russian’s kart skating across the track.

Taym Saleh had to take avoiding action on Mateev’s kart, while the next drivers found Bondarev stationary and the wrong way on the racing line. Sandro Perez went left onto the grass, the next six went right, then Sankka Dahlstrom ploughed straight into him. Both karts did three quarters of a spin in the air, such was the impact velocity, and the race was red flagged. Mateev was able to walk away, but the other two required medical attention.

Bondarev had sustained a black eye and a compound fracture on one leg, and underwent further examination on his injuries once in hospital.

“I thank everyone who cared about me,” he said in an update on Sunday. “I have received several hundred messages with words of encouragement. Sorry for not being able to reply to everyone personally. Surgery was difficult but doctors say it was successful. I have a few months of treatment and rehab ahead of which I’m really hoping to get back on track even stronger.”

Bondarev qualified for the the final, despiting missing the super heat while he was in hospital. In the same room was Dahlstrom, who broke his left leg and hurt his right arm and also underwent surgery.

Mateev meanwhile came eight in the heat and super heat to line up 12th for the final. He climbed to eighth, dropped to 12th then up to sixth before a bumper penalty knocked him to 12th again.

Nathan Tye has taken over from him as points leader by winning the final. He went from third to first at the start, then pulled away while Arthur Dorison and Enzo Tarnvanichkul traded second place.