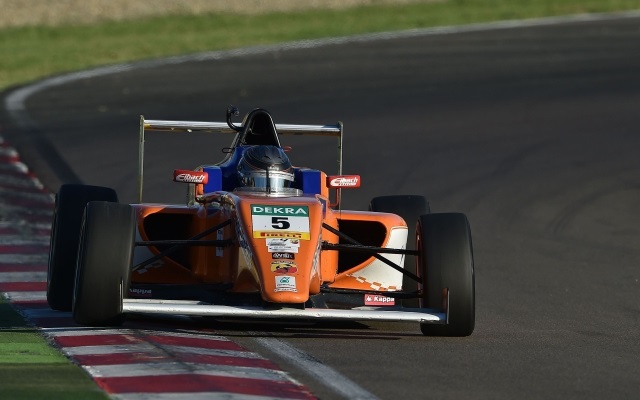 David Beckmann was victorious in the second Italian F4 race at Imola which saw lots of action and retirements.

The Infinity-supported karting graduate completed a perfect recovery during the first two races of the weekend, following his exclusion from qualifying, as he finished eighth in race one and delivered a win in the reverse-grid race two.

The race kicked off with pole-sitter Diego Bertonelli staying in the lead, while Beckmann, third on the grid, managed to get ahead of Joao Vieira.

The Mucke driver ran wide on one occasion during the opening lap though and almost ended up crashing into the wall.

Despite saving?it with excellent car control, he still had give second back to Vieira.

Others were less fortunate at the same corner as two separate spinners crashed into the wall, one of them being Guan Yu Zhou.

The restart after the safety saw further incidents, including an overtaking attempt from Vieira for the lead. The Brazilian tried to take Bertonelli on the inside but there was not enough space and the two of them made contact, with Vieira ending his race in the barriers.

Soon it was Beckmann who challenged Bertonelli and the German was successful, pulling off a bold move round the outside.

Just a corner later Bertonelli ran wide and spun out, which made him drop to the back of the top ten.

As such, Bar Baruch and Marcos Siebert inherited spots in the top three. The Argentinian quickly found his way past the Israeli driver and began closing in on Beckmann for the final minutes.

However, an incident involving Mike Ortmann brought out another safety car and, with no time to restart again, there was no more racing until the checkered flag.

As a result, Beckmann and Siebert finished the race in first and second respectively, the latter celebrating his maiden podium of the season.

Baruch came under massive pressure from Ralf Aron during the closing stages. However, a mistake from the Estonian saw him drop behind Robert Shwartzman, which gave Baruch enough space to grab third.

Bertonelli ended up with no points, finishing just outside the top eight, while Jenzer’s Lucas Mauron took tenth.

UPDATE: Aron has been relegated to 17th after receiving a penalty for overtaking under yellow flag.