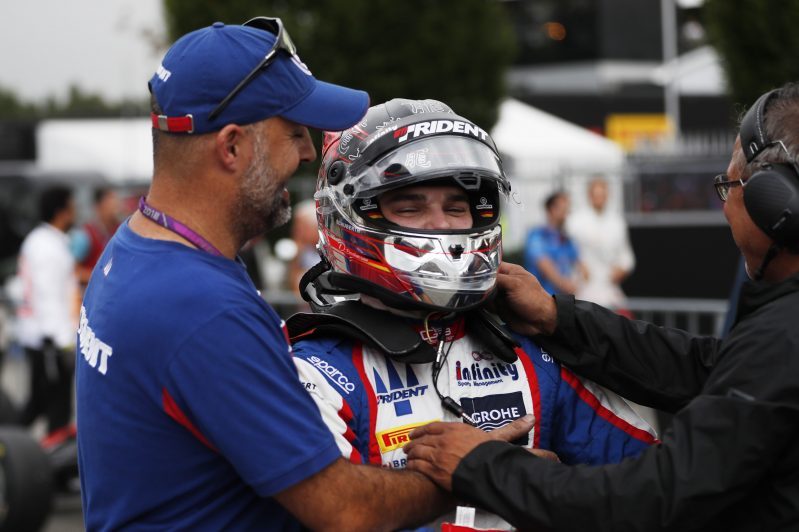 Hubert’s ART Grand Prix team-mate and title rival Nikita Mazepin was fastest after the first runs, and entering the second part of the 30-minute session, Mazepin looked likely to retain pole as rain started to fall.

However, the shower cleared with four minutes?remaining and times began to improve, with?Hubert vaulting from seventh to the top of the times, eclipsing the entire field by 0.506s.

Beckmann, who entered his final run in fifth position, was able to overhaul Hubert’s advantage with three personal best sector times to snatch pole by 0.011s.

Struggling in the closing stages, long-standing timesheet topper Mazepin ended up only 11th.

Setting the session best time through the short first sector, Leonardo Pulcini lost time in the second split. He qualified his Campos Racing-prepared car in third, despite sitting as low as 13th until late on.

Juan Manuel Correa recorded his best qualifying of the season in fourth place for Jenzer Motorsport, having factored towards the top of the times throughout the session.

His team-mate Tatianna Calderon topped a 10-minute practice session immediately prior to qualifying – organised as a result of the morning session being rained off – and was in contention for pole position late-on. However, she lost time in the final sector on her lap, ending up eighth as a result.

Tveter did set the pace after the opening laps in the session but gradually slipped out of contention. He also had a lap blocked by a recovering Devlin DeFrancesco after the Della Roggia chicane.

Trident’s Pedro Piquet could manage only ninth. He set a personal best in sector one on his final lap of the session before he locked up into the Roggia and lost the lap.