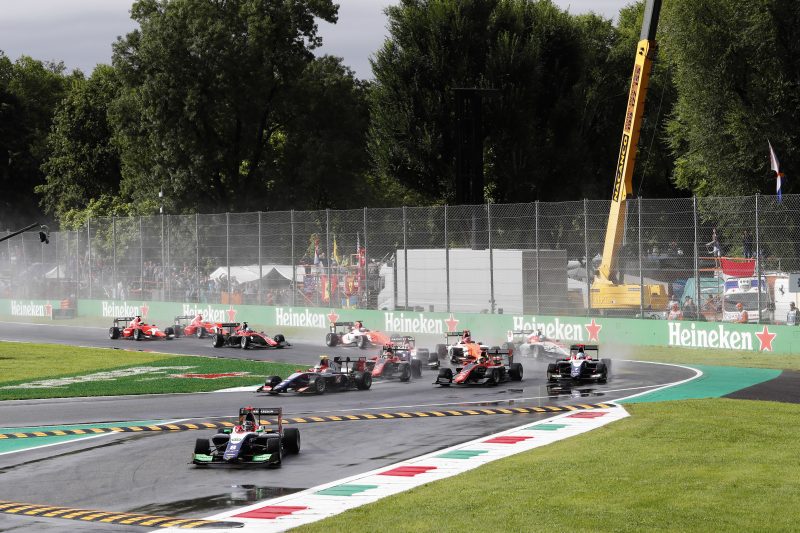 With early morning rain having soaked the circuit, all 20 drivers started on wet compound tyres and while the track dried throughout, a switch to slick tyres was not necessary.

Polesitter Beckmann, in only his third weekend with Trident after having switched from Jenzer Motorsport, was one of a number of drivers to miss the first chicane on the opening lap.

Despite bouncing across the kerbs on the inside of Turn 2, he was able to retain the lead, as many others took the escape road at the end of the straight.

Building a six-second advantage over Hubert by half-distance, Beckmann comfortably managed the gap to claim his second win in as many weeks after having seized his maiden victory at last weekend’s Spa-Francorchamps round.

Hubert finished second to extend his championship lead. His biggest threat during the race was from a charging Leonardo Pulcini. Both joined Beckmann in running off track at Turn 1 on the opening lap, but retained their second and third positions.

Seemingly en route to a podium finish, Pulcini suffered a suspected technical issue in sector one with three laps to go, sliding from third to seventh place before his Campos Racing-prepared car seemingly regained power.

Battling gremlins for the remainder of the race, he slipped to an eventual 14th place finish. ART Grand Prix’s Callum Ilott was the chief beneficiary, claiming the final spot on the podium.

Ilott had a near race-long battle with team-mate and fellow championship contender Nikita Mazepin. Duelling for fourth place at the time, Mazepin ran off-track several times during the fight. In the closing stages, a final mistake at the Della Roggia chicane allowed Ilott to scythe past.

Mazepin’s sequence of errors at Turn 1 continued. He finished fifth after he missed the braking zone at Turn 1 while side-by-side with Simo Laaksonen. Mazepin duly allowed Laaksonen to take a career-best fourth place.

Giuliano Alesi managed to catch Mazepin on the final lap but was unable to mount an attack, finishing in sixth place. His Trident team-mate Pedro Piquet was seventh.

Richard Verschoor grabbed reverse grid pole after passing the plummeting Pulcini late-on. It is only Verschoor’s second weekend in the series after having replaced the promoted Dorian Boccolacci at MP Motorsport.

He finished the race without a nose tip after earlier contact with Tatianna Calderon. She ran as high as fourth place in the race following an eventful lap one in which she tagged and spun team-mate Juan Manuel Correa. As the track dried, Calderon struggled for pace and slipped down the order to finish an eventual 15th.