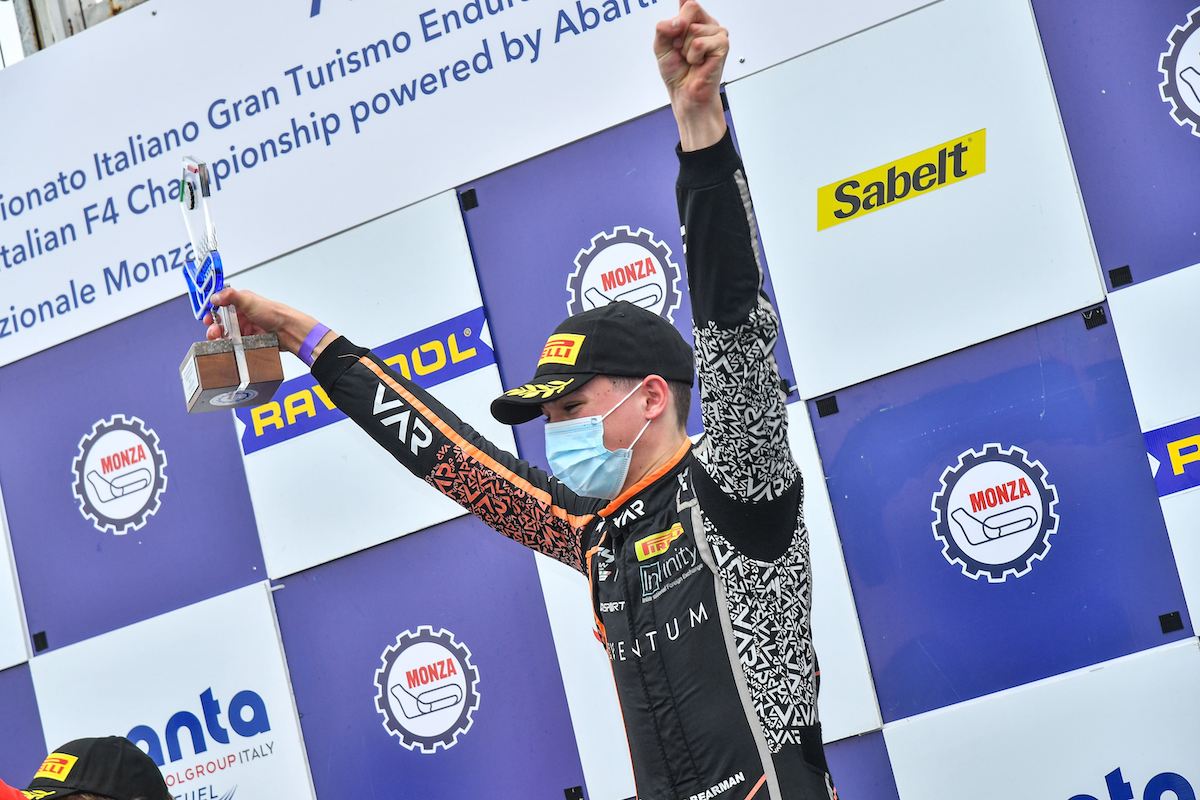 Ollie Bearman took advantage of a late safety car restart to deny Andrea Kimi Antonelli and take his second victory of the Italian Formula 4 weekend at Monza with an excellent drive in tricky conditions.

Prema’s Antonelli had looked on course to take his maiden win in single-seaters but a poor restart gave Van Amersfoort Racing’s Bearman the chance to pass him with just two laps remaining.

Bearman made a forceful but fair move into the first chicane and was able to hold on to take the chequered flag.

The first two laps of the race were run behind the safety car due to the wet conditions caused by light rain preceding the start of the race.

Poleman Lorenzo Patrese, his AKM team having repaired the damaged Tatuus after his collision with Francesco Simonazzi at the end of the first race, held the lead into the first chicane with Sebastian Montoya edging into second.

Montoya was soon in front as Patrese spun exiting the Ascari chicane. One corner later, Leonardo Fornaroli lost his car at Parabolica, collecting Tim Tramnitz who was trying to pass him on the outside. Both spun through 360° and rejoined in ninth and tenth positions.

On lap 5 Montoya ran wide exiting Parabolica and the lost momentum onto the straight allowed Antonelli to pass his team-mate into the first chicane. Montoya lost a further place to Bearman at Roggia on the next lap.

With Bearman unable to close the gap to Antonelli, the young Italian looked comfortable in the lead and seemed on course to record his first win in only his third race weekend, despite having had minimal wet weather running in his brief F4 career to-date.

However, the race’s complexion changed abruptly when the safety car was deployed to allow the marshalls to remove Samir Ben’s car which was beached at the exit of Roggia.

As the safety car pulled into the pits, Antonelli made a poor restart, allowing Bearman to get a far superior exit out of Parabolica, drawing alongside down the pit straight before forcefully taking the lead into the first chicane.

Montoya also managed to squeeze past his team-mate, although Antonelli was able to hold off Joshua Duerksen of Mucke Motorsport to claim his second podium of the weekend.

Tramnitz was unable to get back on terms with the leaders after his early spin, although did manage to recover to sixth place. With Fornaroli not finishing after an off into the barriers at Ascari, the eight points were enough to guarantee Tramnitz the runner-up spot in the championship, despite Montoya’s second place.

Patrese recovered to take seventh, ahead of French series runner-up Maceo Capietto, guesting for Prema this weekend in the colours of sister team Iron Lynx.