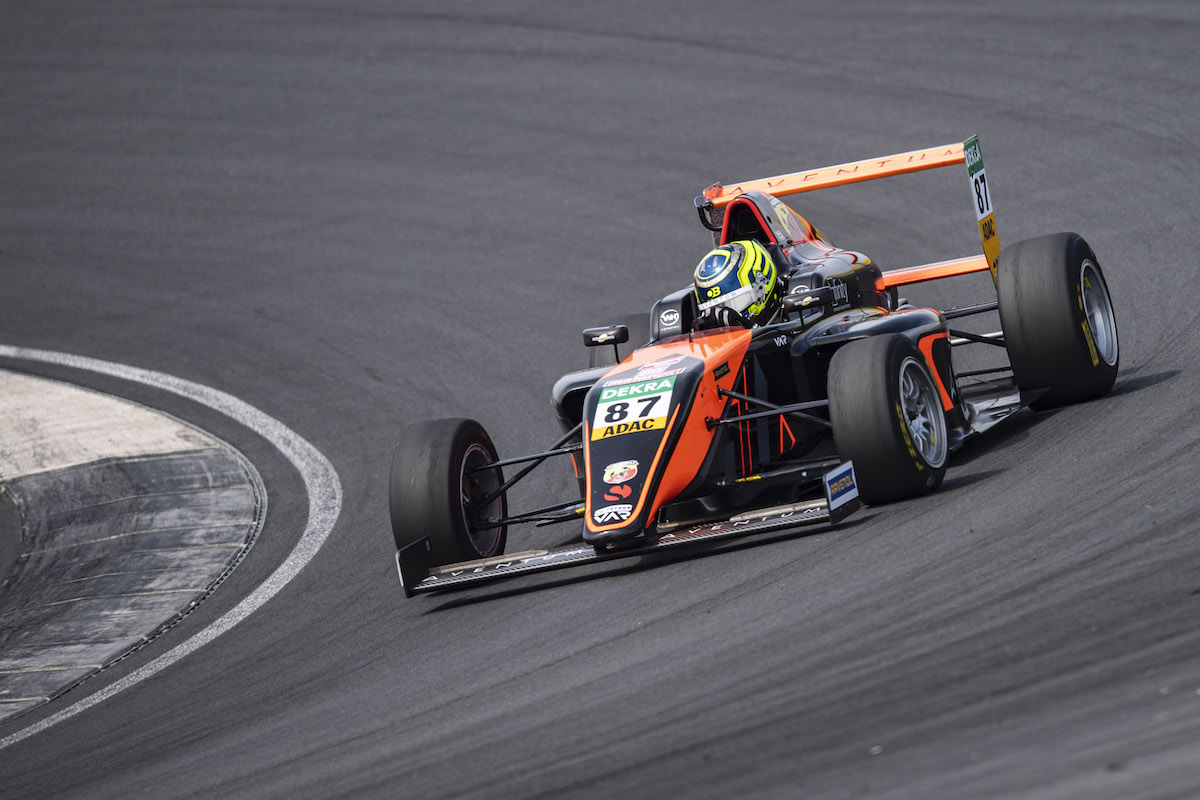 Ollie Bearman clinched the ADAC Formula 4 championship as Nikita Bedrin took his second win of the season in the final race at the Nurburgring.

In so doing, the duo ensured that Van Amersfoort Racing, the defending champions, overtook US Racing to take the teams’ title.

R-ace GP’s Victor Bernier managed to hold on to second position from Luke Browning, US Racing’s only top eight finisher, who had made another strong charge through the order to finish a difficult season on a high.

Tim Tramnitz’s title challenge ended at the first corner of the race, as VAR’s Joshua Dufek tried an optimistic move down the inside, pushing Tramnitz into a spin, dropping the pair to the back of the field.

Tramnitz lost his front wing in the contact necessitating a pit stop for repairs and, while the two safety car periods did enable him to regain contact with the rest of the field, he was unable to get back into the points positions. Dufek received a drive through penalty for his collision with Tramnitz, finishing 12th.

Bernier had made a strong start from the front row of the reversed grid race to get ahead of polesitter and team-mate, Marcus Amand, with the VAR trio of Bedrin, Bearman and Robert de Haan following in line astern.

Bedrin demoted the R-ace GP rookie on lap three, with Bearman following him through at the end of the lap as Amand took to the escape road at the Veedol chicane. De Haan followed suit on the next lap as Amand again ran wide, this time in the AMG Arena.

The advantage that the top three had built over the following de Haan and Browning was quickly eroded as they fought for the lead. Bedrin was looking for any chance to pass Bernier while simultaneously having to defend from a watching Bearman.

On lap nine, Bedrin drew alongside into turn one, running wide but using the momentum to sweep past on the exit and through the AMG Arena.

Just before the safety car was deployed to deal with Nikhil Bohra’s R-ace GP car, which was wedged against the pit wall following a spin exiting the final corner, Browning took advantage of an attack by de Haan on his more experienced team-mate, Bearman, to pass both to take third.

After a lengthy safety car period, racing resumed with two minutes and two laps remaining. Bedrin and Bernier held on to the leading positions, while Browning managed to hold off a late challenge from Bearman to take the final podium place.

VAR’s strong result overturned a deficit of eight points to US Racing going into the final race, ensuring that they retained the teams’ title won in 2020.

The team consequently took a clean sweep of all three titles with the team’s title added to Bearman’s overall championship win and Bedrin’s rookie title, matching their successes in the Italian F4 series to cap a sensational season.