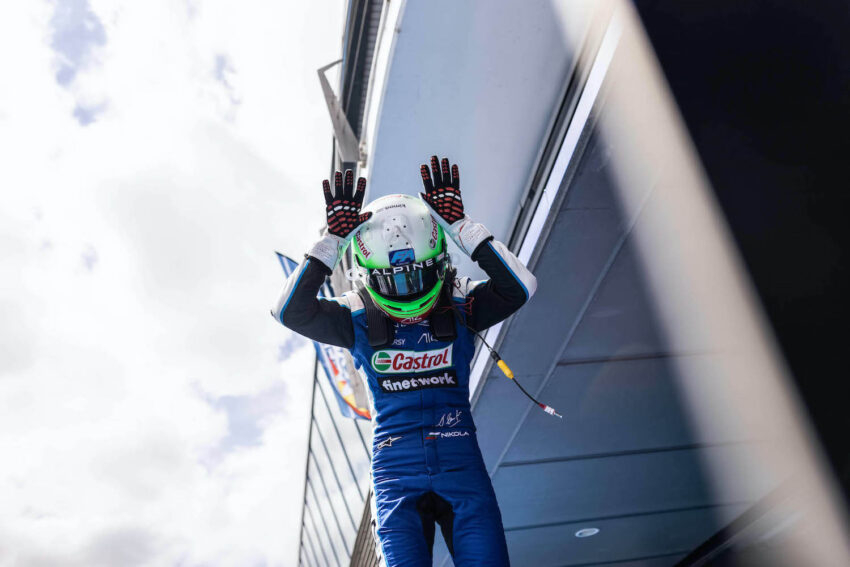 Hugh Barter made it three wins out of three in Spanish Formula 4 at Navarra, but it was not enough to stop Nikola Tsolov becoming champion.

Barter needed to outscore Tsolov by 18 points to keep the title fighting going into the final round at Barcelona, and started six places in front of his rival on the grid.

On pole was their Campos Racing team-mate Noah Stromsted, but he stalled off the line and MP Motorsport’s Christian Ho led into the opening corner. Barter, who started third, pressured him through the first two sectors before eventually getting through into the lead while Tsolov went from ninth to sixth, then passed Jesse Carrasquedo Jr and Timoteusz Kucharczyk for fourth as they squablled for position.

The lap ended with a spin for Carrasquedo at the final corner, and he was collected by MP’s Miron Pingasov who lost his front-left wheel but decided to drive on until he went off track and ended up beached in the gravel, causing the first safety car period of the race and earning the attention of the stewards for unsporting behaviour.

Ahead of Tsolov was team-mate Georg Kelstrup, while Stromsted got caught up in the final corner melee and dropped outside of the top 20 before Maxim Arkhangelskiy and Marcos Flack ended their race in the pits.

Racing resumed on lap six and Tsolov passed Kelstrup for third at turn one, with Kucharczyk following him through a few corners later. Valerio Rinicella also made a move on Kelstrup before the end of the lap, with Kirill Smal – who had flown over the kerbs earlier in the race – then on his tail.

There were then yellow flags as Stromsted spun around and Robert de Haan passed Kelstrup around the outside of turn two but ended up spun around into the gravel as his rear-right wheel contacted Kelstrup’s front-left.

That required a second safety car period, during which time Tsolov was put under investigation for a potential yellow flag violation. He passed Ho for second on the restart but had no answer to Barter’s pace and finished 1.876 seconds behind.

Kucharczyk managed to fight his way past Ho before the end of the race to finish third, and Rinicella came by too.

Smal was in that battle until a second airbone moment over the kerbs caused him to retire in the pits, and Kelstrup finished sixth.

Several hours after the race, the results of the stewards’ investigations came through and Tsolov was penalise five seconds for violating track limits, dropping him to third but not effecting his title coronation.

Kelstrup also got a 5s penalty, knocking him down to ninth, while Sebastian Gravlund lost his first point to a 25s penalty for overtaking behind the safety car. Tasanapol Inthraphuvasak committed the same offence and went from eighth to 21st, meaning Theophile Nael and Gael Julien moved into the points positions.

Cram Motorsport’s Ricardo Escotto missed the race as he was excluded for an incident earlier in the weekend with Daniel Mavlyutov.