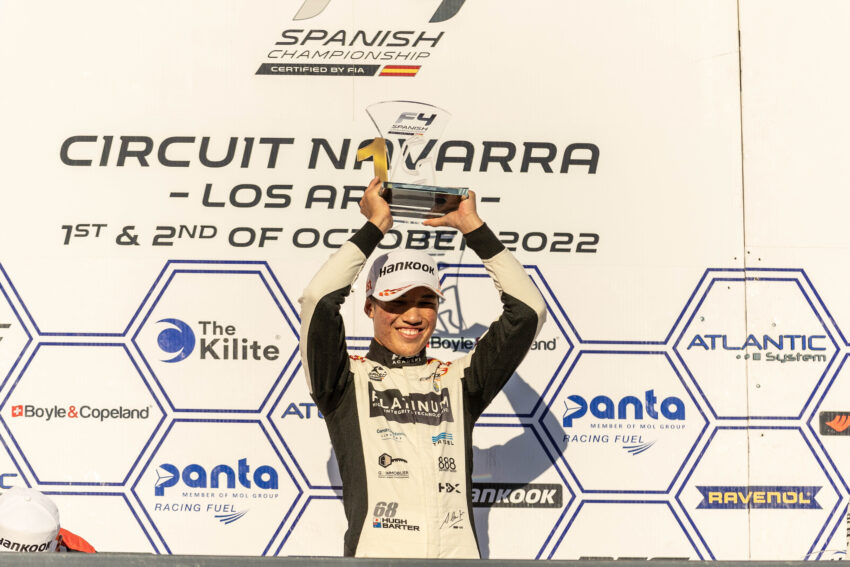 Hugh Barter took another small bite out of Nikola Tsolov’s Spanish Formula 4 lead in the second race at Navarra, but the latter still looks set for the title.

There is a gap of 89 points between the pair, in Tsolov’s favour, and there are 98 points available to score in the season’s remaining four races.

Barter took seven points out of Tsolov’s lead with a lights-to-flag win on Sunday morning at Navarra, keeping his Campos Racing team-mate at bay through the first two laps and then again through the last three as the middle of the race was spent running behind the safety car due to a big crash involving Monlau Motorsport’s Jef Machiels and Formula de Campeones’ Julius Dinesen.

MP Motorsport’s Kirill Smal finished third behind the Campos duo, whose only true moment of battling was at the final corner of the race when Tsolov looked down the inside, with a big gap to his own team-mate Timoteusz Kucharczyk who passed Campos’s Noah Stromsted early on for fourth.

Daniel Nogales and Valerio Rinicella were not far behind them in sixth and seventh, but they had all been behind Campos’s Georg Kelstrup before he came into the pits on the final lap and finished the race in 19th.