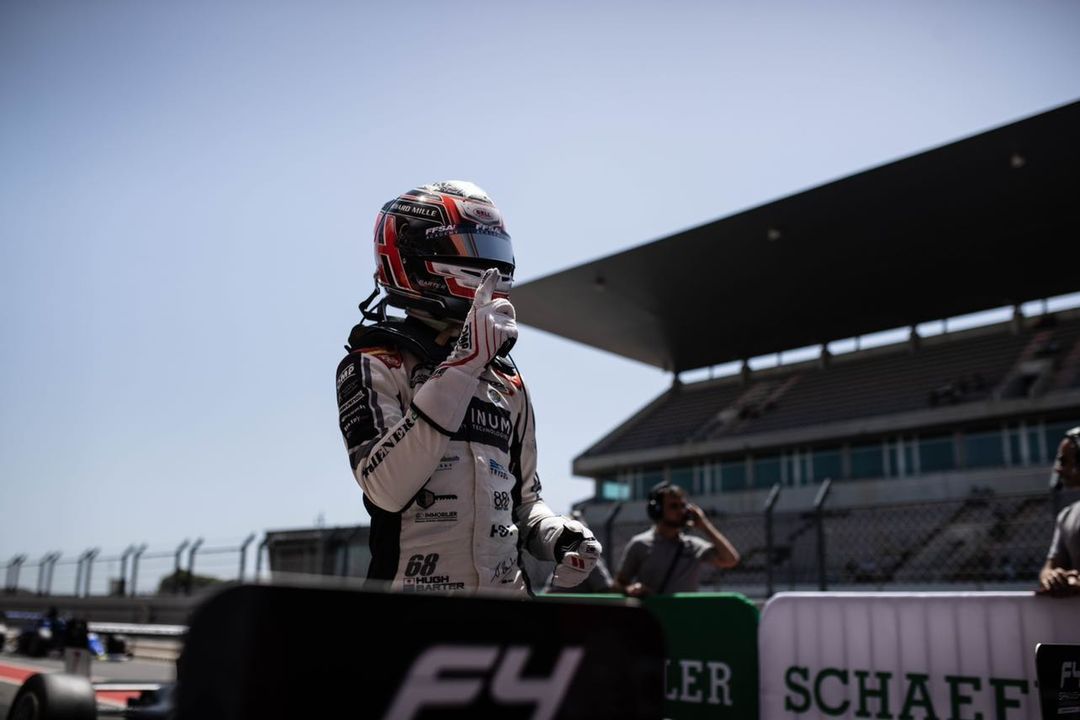 There was drama from the very start of the race, as poleman Nikola Tsolov stalled and fell to the rear of the 30-car field and his fellow front-row man Tymoteusz Kucharczyk picked up the lead.

Barter managed to get around the outside of Kucharczyk at the Lagos hairpin and finished the first lap ahead of five squabbling MP Motorsport drivers. Kucharczyk and Valerio Rinicella were at the head of those, and broke away with Barter through the first third of the race.

On lap eight of 14, Kucharczyk was alongside Barter on the outside entering the heavy braking zone of the first corner. Barter braked later to stay ahead, but then Kucharczyk maintained more speed around Lagos to reclaim first place.

Not willing to give up the win, Barter then dived back past at the Torre Vip hairpin. On the next lap he messed up his exit at the same corner and Kucharczyk passed him again. Barter kept alongside though through the next sector of the lap and they clashed wheels at Portimao corner while Rinicella was considering making it three-wide.

He got his chance to take second place when Barter got loose going down the long and bumpy Galp corner that ends the lap, but Barter had the speed advantage down the pit straight and was back ahead into turn one. Rinicella’s progress was then undone further as a lock-up at Lagos allowed team-mate Tasanapol Inthraphuvasak through – with the other MP drivers having caught up to the fighting leaders – and then he made a mistake at the second hairpin too. At the end of the lap he chose to pit.

Kucharczyk now had a handy lead over Barter, but over the next few laps he closed back in and managed to pass Kucharczyk once again. Second then became third for the Pole as he got crossed up at the second hairpin and Inthraphuvasak got by.

Inthraphuvasak almost got a sniff at victory on the final lap as Barter made another mistake, but the latter held on to win by 0.455 seconds.

Outside of the top three there were some impressive charges, with MP’s Kirill Smal rising from 14th to ninth, Tsolov recovering to 14th and taking fastest lap, and Drivex School’s Bruno del Pino going from last to 15th after the laptime that had put him 10th in qualifying was deleted.

Vladislav Ryabov, Noah Lisle and Anshul Gandhi all pitted with punctures or damage, and Gandhi was one of nine warned for track limits abuse. Jesse Carrasquedo Jr and Daniel Nogales were penalised for the offence.

Lola Lovinfosse ended the race in the pitlane rather than taking the chequered flag at the back.