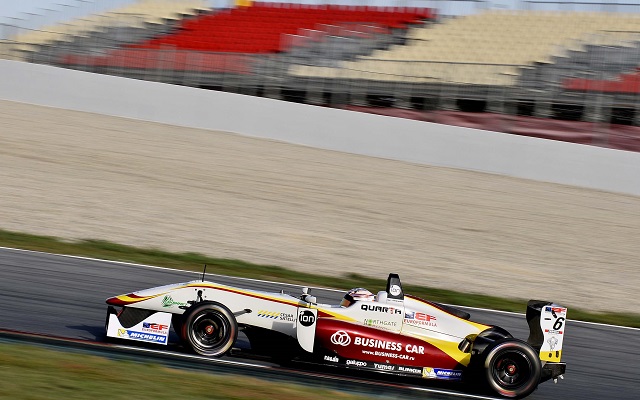 Konstantin Tereshchenko doubled up to take another lights-to-flag victory at Catalunya, collecting 53 out of the maximum 54 points over the weekend.

His attempt to steal the title from favourite Vitor Baptista, however, proved to be unsuccessful as the Brazilian made it home safely in fifth to become the 2015 Euroformula Open champion.

Tereshchenko had a good getaway off the line with Campos teammate Diego Menchaca taking second from Ferdinand Habsburg.

The duo then went on the control the race and secure the team’s first 1-2 since their return to the series in 2012, as well as the Mexican’s first top=three finish.

The podium was completed by Daniel Juncadella,?having?held off early pressure from Habsburg, who tried an unsuccessful overtaking attempt at turn one.

Although it was Yu Kanamaru slotting into fifth after the start, he lost a place to Baptista during the race, the Brazilian making a forceful move down his inside.