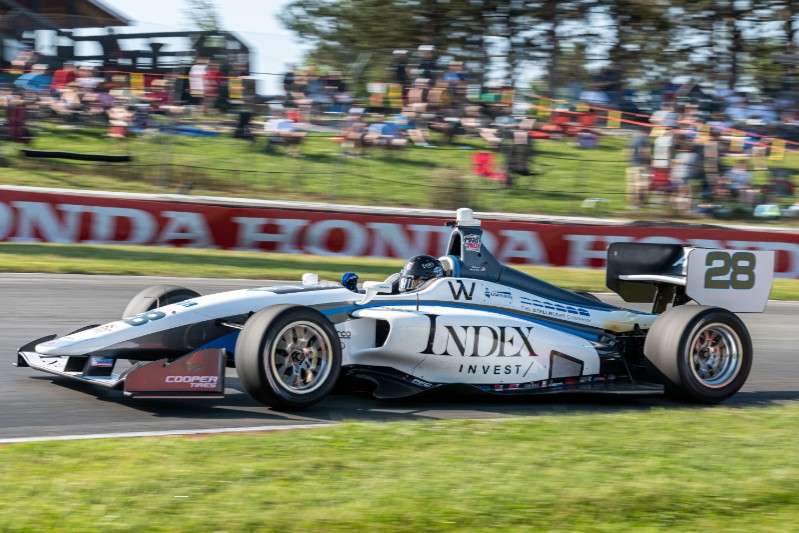 After fending off Andretti Autosport team-mate Robert Megennis at the start, Askew controlled the pace up front throughout and took victory by n.n seconds.

Megennis held second place until his tyres started to degrade, enabling team-mate Ryan Norman to get past on lap 19 of 30.

After taking the position, Norman immediately set his personal best lap, but Askew responded with fastest lap. He then bettered that benchmark with two laps to go.

Askew’s chief title rival Rinus VeeKay also got past Megennis in the latter part of the race, having started down in sixth, and the Juncos Racing driver closed in on Norman in the closing laps.

David Malukas was the only finisher for BN Racing in fifth, after team-mate Toby Sowery crashed out. The Englishman, whose car is co-entered by Team Pelfrey, span at the beginning of the race and was charging back up the order when he dropped two wheels in the gravel exiting Turn 11 on lap 10 and span into the run-off on the other side.

Belardi Auto Racing’s Lucas Kohl was an anonymous sixth, heading spinners Dalton Kellett (Juncos) and Aaron Telitz (Belardi). Many believed the spins were down to a Stadium Super Trucks race that had been held earlier in the day making the track less grippy.

After complaining of handling issues, Telitz took to the pits and remained there for several laps as his team experimented on a new front damper set-up.