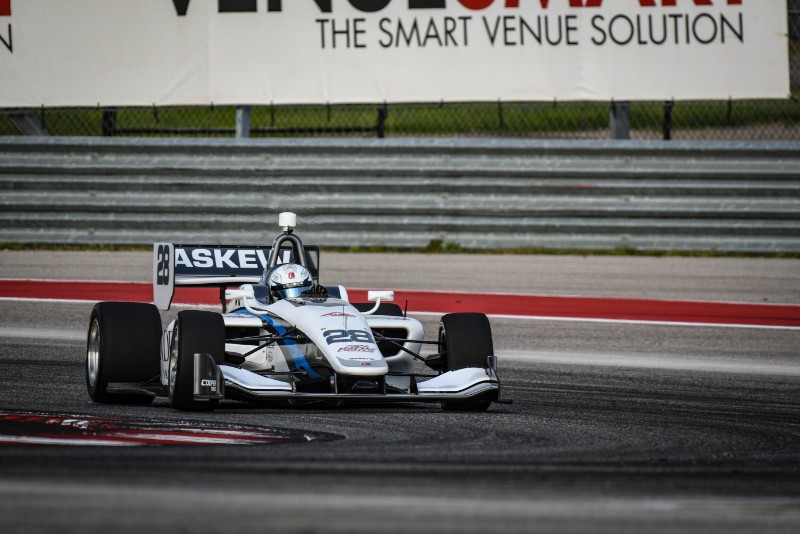 Oliver Askew took his first Indy Lights win in dominant style in the opening race at the Circuit of the Americas, the first time that Road to Indy categories have raced at the track.

After a chaotic opening lap, Askew’s Andretti Autosport car was unseen in the 20-lap race at the Formula 1 circuit, taking victory by 24.68 seconds despite spending much of it conserving his tyres.

There was a race-long battle for second place, with Toby Sowery (BN Racing/Team Pelfrey) and Robert Megennis (Andretti) initially fighting over the position as Rinus VeeKay struggled to hold on to fourth behind.

The first move in the battle occurred on lap six, with Megennis passing Sowery at the end of the long back straight. This led to a series of copycat moves after Sowery reclaimed the position at Turn 1 two laps later. Despite locking up heavily, Megennis’s second attempt was also successful, before losing it once again at the start of the next lap.

At half-distance the fight for position for more intense, with the pair switching positions multiple times on each lap. Each often involved locking of brakes, and as their tyres degraded it allowed Juncos Racing’s VeeKay to close in, having overcome his early troubles.

On lap 13 the trio were covered by a second, and two laps later VeeKay took third from Sowery around the outside of Turn 2. Sowery fought back later in the lap, but by then his tyres were beyond their best and he dropped back. VeeKay’s progress went the other way, closing in on Megennis and passing him for second on the back straight with one lap to go.

On the last lap Sowery dropped to sixth, putting Belardi Auto Racing’s Julien Falchero and Andretti’s Ryan Norman ahead of him. Norman had qualified second, but a spin on the warm-up lap meant he was at the back on the rolling start.

He was sixth by the end of the first lap, and became involved in an early battle for fourth with the struggling VeeKay and BN Racing driver David Malukas. This ended when Malukas put Norman off the track at Turn 11, a move that dropped Norman behind Falchero and put Malukas out of the race.

After failing to set a lap in qualifying, pre-race championship leader Zachary Claman DeMelo caught the ire of his Belardi team when he divebombed team-mate Lucas Kohl at Turn 1, causing damage to both. The pair finished a very distant eighth and ninth, while Juncos’s Dalton Kellett did even worse and was lapped.

DeMelo has now lost the points lead to VeeKay, with Askew up to third in the standings.