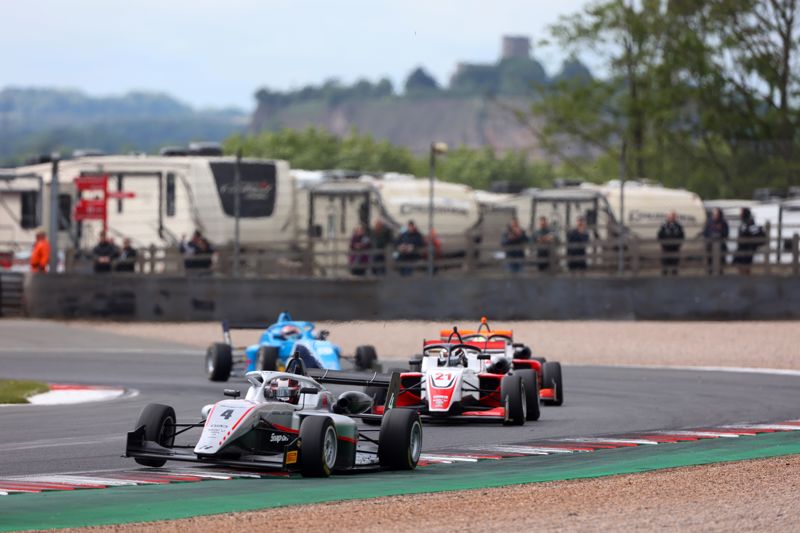 Aron finished 2.729 seconds clear of Branden Lee Oxley to give Hitech its second reversed-grid triumph in a row.

The American converted pole into the lead at the start, while Oxley moved up the inside of Fortec Motorsports’s Mikkel Grundtvig into second at Redgate.

Tommy Smith pounced to snatch third moments later, but the Douglas Motorsports driver was handed a 10-second time penalty for a jump start.

Aron pulled clear to take a comfortable win, while Grundtvig inherited third due to Smith’s penalty, having finished fourth on the road.

After being hampered by a throttle issue in qualifying, Elite Motorsport’s John Bennett moved up two places to fifth on the opening lap and ended the race in fourth, having been tucked under the rear wing of Grundtvig throughout.

Smith was demoted to sixth after his penalty, ahead of Carlin’s Callum Voisin, who climbed from 19th on the grid. Matthew Rees came from 20th to eighth for JHR Developments ahead of Arden’s Alex Connor.

Luke Browning was involved in a frenetic battle with Rees and Connor during the race before finishing 10th, one place ahead of title rival Joel Granfors, who gained more places from 21st on the grid to move back ahead by a point in the championship. Race two winner Max Esterson was 12th.

Roberto Faria suffered a blow to his championship chances, having pitted twice for a front-wing change and then a puncture after being involved in first-lap contact.

Cian Shields was another to lose his front wing during the race, dropping the Hitech driver down the order.