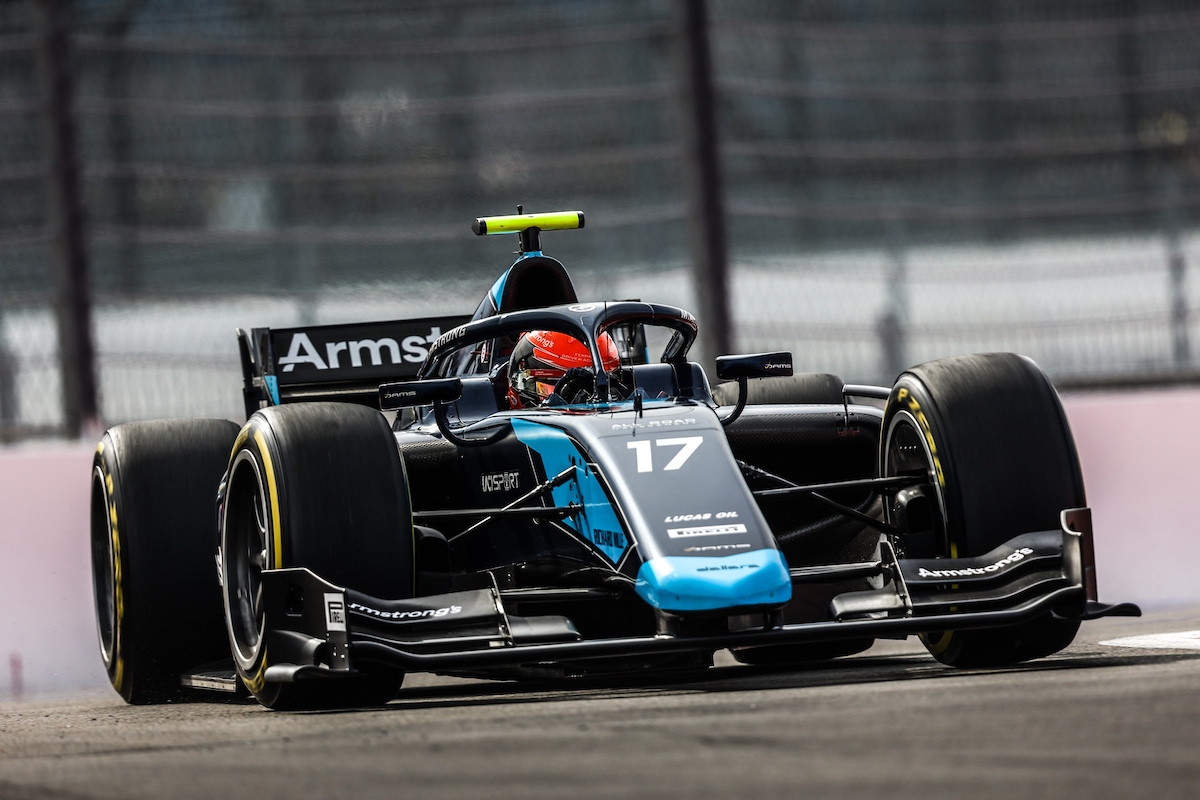 The very first race in any category around the Jeddah Corniche Circuit exceeded expectations with lots of on track action.

A good getaway allowed DAMS’ Marcus Armstrong to go into the inside of polesitter Lawson in the first corner. The Hitech driver had to go wide to avoid contact with countryman Armstrong, giving up the lead in the process.

The safety car made a first appearance already on lap one after contact near the back of the pack. Campos Racing debutant Olli Caldwell touched the back of Guilherme Samaia going into turn four, which pushed the Brazilian into the wall. Marino Sato was then collected by Samaia’s uncontrolled car, and both had to retire from the race. Caldwell was awarded a 10 second-time penalty.

After the safety car came in at the end of lap three, Guanyu Zhou went side by side with Christian Lundgaard into turn one having lost a couple of places from fifth to seventh at the start. Virtuosi’s Zhou went for the inside of turn two, but went over the kerb, made slight contact with Lundgaard, and spun round, dropping to last place and having to pit a front wing change.

Starting from fourth, Campos Racing’s Ralph Boschung had gained a place on Vips at the start to move up to a podium position, but his pace dropped massively around 10 laps in, allowing the drivers behind to close up and pass, with Vips regaining third and Felipe Drugovich taking fourth. Boschung would eventually take the chequered flag down in 15th place.

Just outside the top 10, Dan Ticktum and Bent Viscaal went wheel to wheel for most of lap six. Ticktum ended up passing Viscaal in turn four of lap seven, but went off the track and was instructed to give the position back. Notwithstanding, the Briton would overtake Viscaal again in the following lap.

A similar late-braking move into turn four allowed Prema’s Robert Shwartzman to move ahead of Lundgaard, but he also made use of the run-off to complete the manoeuvre and was later handed a five second-time penalty.

Theo Pourchaire was running just behind Shwartzman and Lundgaard when he lost control going into the notorious turn 22, ending up in the tec-pro barriers and causing another safety car period.

The race restarted with three laps to go, and Armstrong came under heavy pressure from Lawson right at the end of the final lap, but held on to take victory.

Daruvala moved up from ninth to fifth in just a couple of laps, taking advantage of the battle between Lundgaard and championship leader Oscar Piastri. Going into the last lap, Lundgaard then defended hard from Piastri on the main straight, and that allowed Ticktum to attack the Prema driver, making a brilliant move around the outside of Piastri in the last corner of the race.