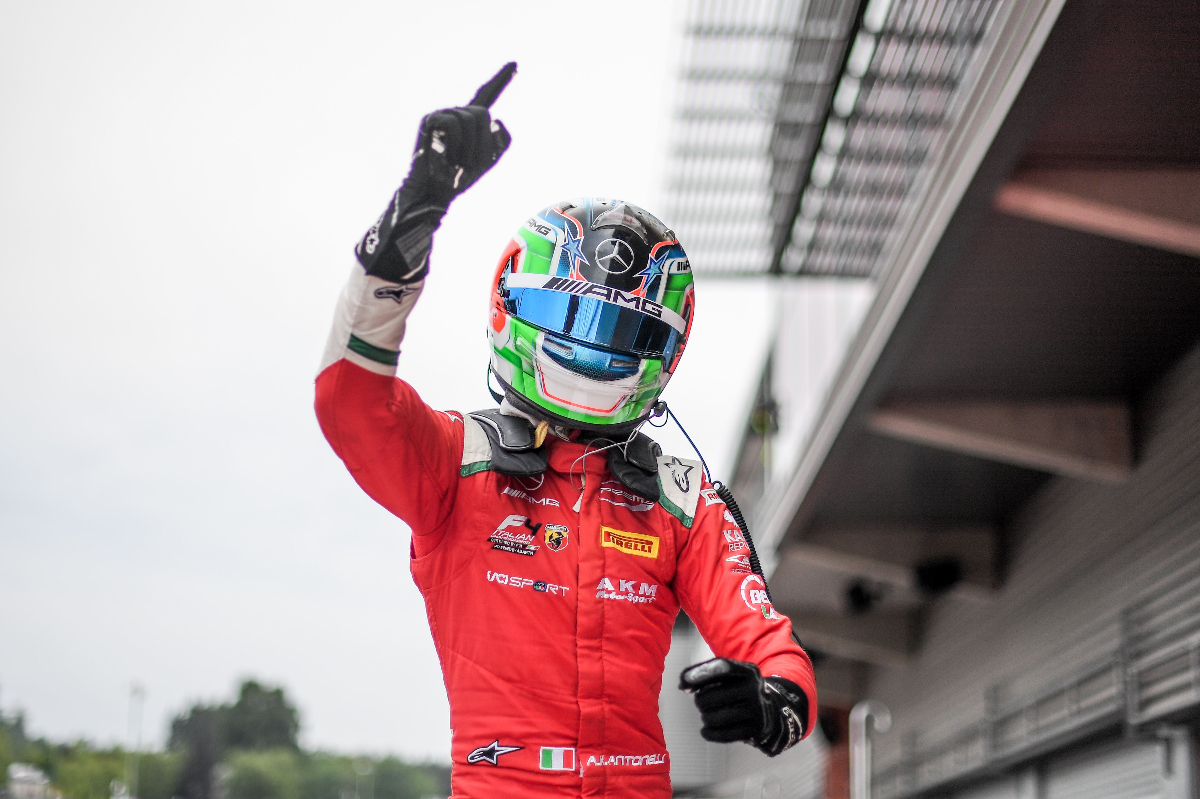 Andrea Kimi Antonelli completed an unbeaten weekend at Spa-Francorchamps by winning the third Italian Formula 4 race at the track.

Antonelli won from pole in the first two races, and started second for race three courtesy of the grid being set by each driver’s second-best qualifying laps.

Second became first instantly though as poleman and Prema team-mate Rafael Camara stalled and dropped to 34th while the other two Prema cars of Conrad Laursen and James Wharton disputed second.

Antonelli didn’t have enough time to break the slipstream as the safety car was called out mid-lap after Wharton was hit out at Les Combes by PHM Racing’s Nikita Bedrin who had attempted to go around his outside at Les Combes to take second place but turned in so late that he then jolted across into Wharton.

On the restart Antonelli did break the tow, and he spent the remainder of the race minding his own business as he took his fifth win in six races and a perfect weekend triple.

Laursen had a similarly easy job in second place while Bedrin initially ran ahead of Wurz (another Prema driver) and the US Racing trio of Marcus Amand, Nikhil Bohra and Alex Dunne until he was given a drive-through penalty for his Wharton clash.

Amand did get ahead of Wurz, but he reclaimed the position later in the race. His pass on Amand put him into the clutches of not only Dunne but also latterly PHM’s Taylor Barnard and the recovering Camara who had climbed to 19th by lap five, 10th by lap eight and then seventh on lap 10 as he dived down the inside of US’s Kacper Sztuka into La Source.

Dunne and Amand went side-by-side into Les Combes on that lap and although they kept it clean it meant Barnard could get alongside them. He than ran into the gravel and Camara and Sztuka got through, then Camara cleared the US pair nex time by.

With two laps remaining Camara was only half a second behind Wurz, and he passed the Austrian down the inside of Les Combes to remarkably make it onto the podium.

Wurz resisted Dunne’s attacks on the final lap for fifth, with Sztuka bearing Mand to seventh.

Barnard was demoted to ninth on the last lap by Van Amersfoort Racing’s Martinius Stenshorne at Les Combes, and Bohra scored the final point in 10th.