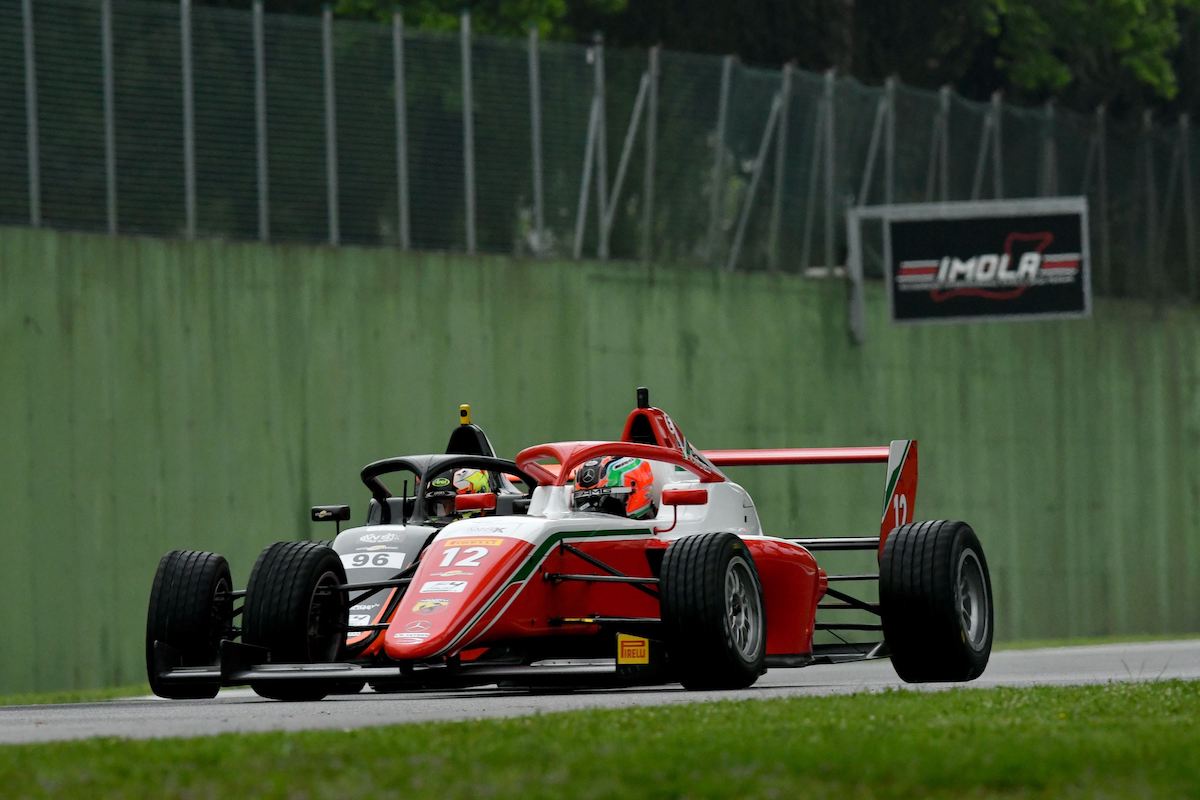 Tyre choice proved crucial in the two qualifying sessions for the season-opening Italian Formula 4 round at Imola, resulting in a mixed-up order for the second and third races.

Those who gambled on slicks for the second session were left to rue their decision as wets proved the correct option, relegating many of the top runners to lowly grid slots.

Prema’s Andrea Kimi Antonelli continued his strong form from Friday to top the opening session, ensuring pole position for race one at his home circuit, but could only manage 14th fastest in the second session having opted for slicks on the drying but still slippery track.

Alex Dunne went fastest in the second session for US Racing, after making a pitstop to change back from slicks to wets, while pole for the third race, determined based on second-best times from the two sessions, went to Ivan Domingues for Iron Lynx.

On a track still wet from overnight rain, Antonelli was immediately to the fore in the first qualifying session. He was the first driver of the weekend to break the two minute barrier, before improving to a 1m58.817s on his third lap, putting him at the time over 1.2s ahead of next man, Alex Dunne.

Camara and Wharton moved into the top three slots behind Antonelli, mirroring the picture from Friday’s free practice sessions. However, with less than three minutes remaining, PHM Racing’s Taylor Barnard leapt to the top of the times, before late improvements on the drying surface dropped him to fifth at the flag.

Wharton and Dunne were unable to match the late improvements elsewhere, finishing in sixth and seventh positions.

For the second session, most of the leading runners opted for slicks on the drying track, a decision which quickly proved mistaken. The early laps produced a female one-two as Viktoria Blokhina and Maya Weug headed the field with two laps completed.

US Racing’s Kacper Sztuka brought the mark down to 1m57.945s, the Pole having reverted to wets for Q2 after gambling on slicks for Q1, before his time was beaten by Domingues.

After realising his error in starting on slicks, Dunne was one of the first to pit for wets, immediately going to the top of the timing screens with a lap of 1m55.662s with four minutes remaining.

Frederik Lund moved up to second on his final tour, 1.128s behind Dunne. Domingues, Weug, Pedro Clerot and Sztuka completed the top six in a chaotic session that was red flagged two minutes before the scheduled 20 minutes had been completed.

Of Friday’s pace setters, James Wharton could only manage tenth, Antonelli 14th and Camara failed to set a time after engine problems, relegating him to 33rd and last on the grid for the second race on Sunday.

The second-fastest times were largely determined by the quicker second session, meaning Sztuka joins Domingues on the front row ahead of Weug and Taylor Barnard, who set the best second-fastest lap in Q1. Antonelli and Dunne will start ninth and tenth respectively, although Camara salvaged fifth on the grid for race three thanks to his Q1 time.