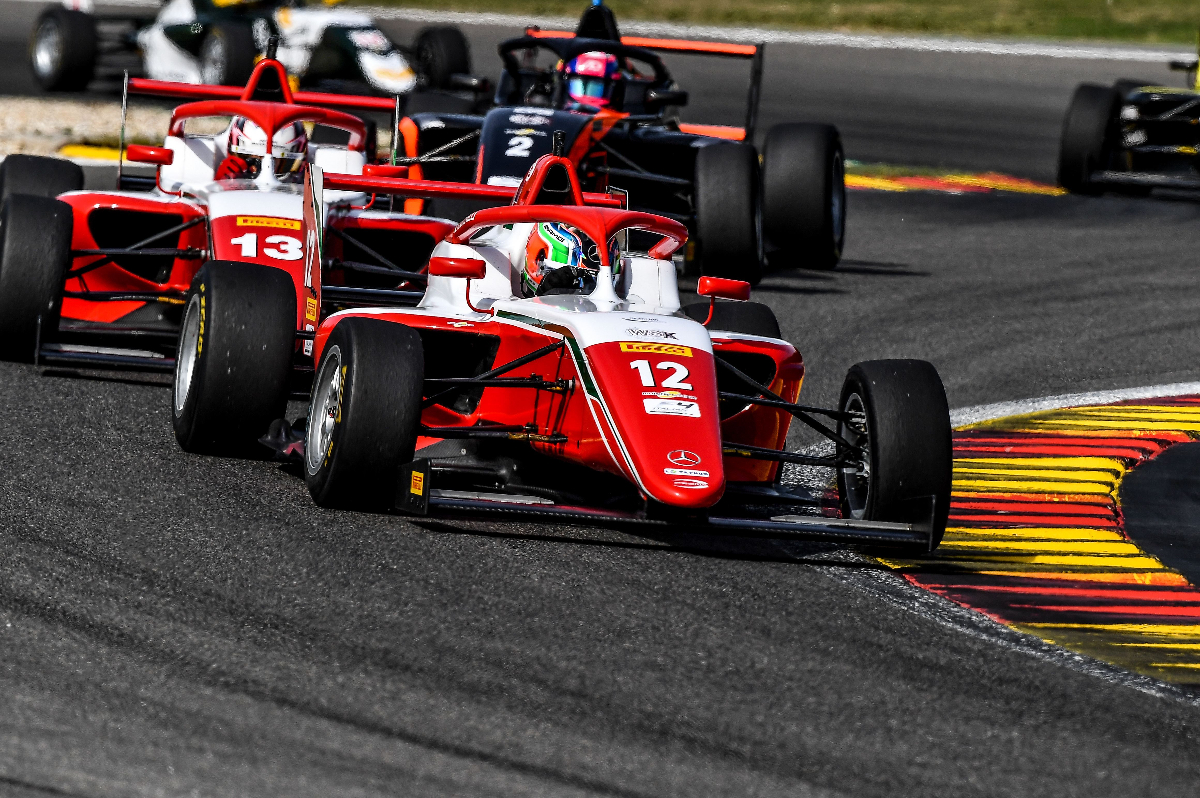 Andrea Kimi Antonelli topped both qualifying sessions for Italian Formula 4 at Spa-Francorchamps, but did not claim pole for all three races.

The first session was stopped after drivers had done one lap of warming up the tyres following their outlap, as BVM Racing’s William Karlsson had an incident and red flags being waved.

The field headed out en masse when Q1 restarted, and Van Amersfoort Racing’s bunch of drivers slipstreamed with each other well to result in Brando Badoer going onto provisional pole position with a 2m23.958s lap and to lead a VAR 1-2-3-4.

Next time by it was Prema’s drivers that mastered the traffic, and James Wharton was very briefly quickest before Charlie Wurz went fastest. Rafael Camara went even faster than him to create a Prema lockout of the top four, ahead of US Racing’s Alex Dunne and Nikhil Bohra.

The chequered flag waved and all of the top 20 on the timesheet still had time for one flying lap. Antonelli crossed the line with a 2m22.231s lap, and though his team-mates improved they could not match his final effort.

He took pole by 0.171 seconds from Wharton and 0.200s from Camara, with Wurz’s completing the all-Prema top four. PHM Racing’s Nikita Bedrin jumped to fifth, while Dunne and Bohra were the only drivers in the top 18 not to improve and dropped down to ninth and 10th.

VAR’s drivers were some of the last to cross the line but being on a faster track didn’t help. Although they all improved their pace, Brando Badoer was the highest placed of the team’s drivers in 13th.

Following his Q1 mishap, which left him towards the bottom of the grid, Karlsson initially recovered well by going to the top of the times in Q2 before a very brief red flag interruption.

After that there was time for three flying laps for most drivers, and Antonelli shot to the top with a 2m22.493s ahead of team-mates Wharton and Conrad Laursen.

With two minutes to go it was Camara who lowered the pace by a few hundredths of a second, as he had left the pits some time after Antonelli whose next lap with a half minute to go did the job in reclaiming pole.

Once again the chequered flag waved and there was time for one more lap, and on this occassion Camara was the only driver in the top four to improve his pace. He was still two tenths off poleman Antonelli, while Bedrin improved to fifth.

Dunne, Marcus Amand, Bohra, PHM Racing’s Taylor Barnard and VAR’s Martinius Stenshorne completed the top 10. The next best driver to improve on their final lap was Wurz, down in 13th.

The race three grid is set off each driver’s second-best laptime from the two sessions, and it was Camara who actually beat Antonelli to pole by 0.065s as Prema dominated at the top again.