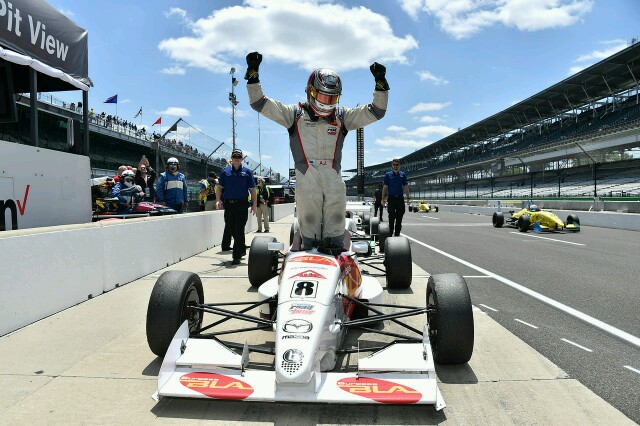 The Cape Motorsports with Wayne Taylor Racing teammates finished only a half-second apart, but Martin was able to handle the pressure from his championship-leading teammate to score the first victory of his Mazda Road to Indy career.

Victor Franzoni got the jump on?Jordan Lloyd?on the start, and came home to finish third for ArmsUp Motorsport ahead of Lloyd.

Yufeng Luo?held onto fifth place after?Luke Gabin, who climbed up from 24th place on the grid after a post-qualifying penalty, went off track from sixth place. Gabin would finish 20th.

Lukas Kohl?led the rookie contingent with his sixth place finish for John Cummiskey Racing,?one spot ahead of teammate?Ayla Agren, who recorded her fourth top-ten finish of the season.

Robert Megennis moved up from 14th to finish eighth, and?TJ Fischer completed a remarkable recovery drive to finish in ninth place after starting 25th on the back row of the grid. Fifteen-year-old?Jordan Cane completed the top ten.

Of those who suffered from issues throughout the race, National Class driver?Dale VandenBush retired just two laps in with an electrical issue.?Nikita Lastochkin never recovered from a drive-through penalty meted out after colliding with?Garth Rickards and sending him off track – Rickards finished 15th, Lastochkin a lowly 23rd.