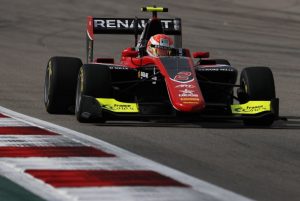 Renault-affiliated Hubert set his session-topping 1m53.146s lap right at the end, beating Jake Hughes by 0.281 seconds. Hughes, currently the leader of the Asian Formula 3 championship, was the first on track, and was hovering at the top of the times for most of the session.

Following them was the third ART car of Nikita Mazepin, who will be racing a car in his home country of Russia for the first time in Saturday’s race.

Giuliano Alesi led a Trident trio also consisting of Pedro Piquet and Ryan Tveter in fourth to sixth, while their team-mate David Beckmann,?the winner of two of the last four races, ended down in 11th despite topping the times for a while.

Championship debutant Sacha Fenestraz was 12th fastest in pace of Julien Falchero at Arden, the Renault F1 junior less than a second off the pace.

Callum Ilott, another driver who was fastest at one point and is currently third in the standings, was third slowest in 18th.