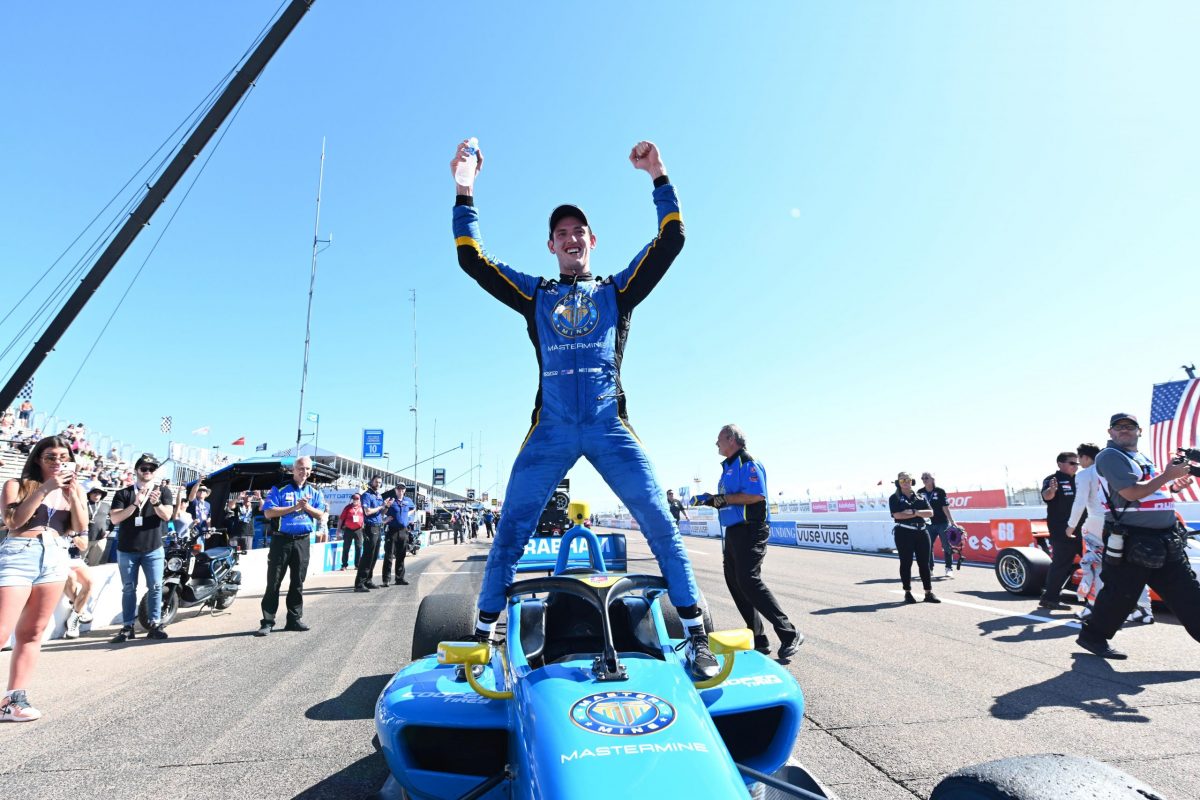 Andretti Autosport twice almost lost victory in Indy Lights’ St. Petersburg season opener last weekend, but in the end got the job done after heartbreak for two of its drivers.

Debutant Hunter McElrea claimed pole for the team, and led 11 laps before a squirm at the final corner led to him crashing out of the race, promoting team-mate and fellow debutant Christian Rasmussen to first place.

Reigning Indy Pro 2000 champion Rasmussen looked comfortable out in front, leading the next 32 laps until he grinded to a halt with less than two laps to go as he ran out of fuel. Andretti’s third driver Matthew Brabham inherited the lead and win.

“First thing’s first, absolute heartbreak for my team-mate Christian,” said Brabham after getting out of his car in victory lane.

“He had me in the race. I couldn’t keep up. I could just stay in range, but not enough for the push-to-pass. I can’t imagine how he’s feeling.”

While Brabham does have previous Indy Lights experience, he hasn’t appeared in the series since 2015 when the current Dallara IL-15 car debuted. He only contested two rounds that year, and came fourth as a rookie with Andretti in 2014.

“For me, especially after being away for so long and coming back and having success like that, it’s unbelievable,” he said. “I’m speechless. I’m pretty emotional.

“I just got lucky. I mean I was pushing. I was doing everything I could. I tagged the wall a few times, probably more than I should have.”

It was the 28-year-old’s first single-seater start since contesting S5000’s inaugural event in 2019, and before that the Stadium Super Trucks star had a two-race IndyCar career in 2016 he plans to revive.

“Guess who’s back, back again, Brabs is back, tell a friend,” he posted to Instagram. “Wild race but somehow I ended up on top. Big thank you to everyone that’s supported me over the years and never stopped believing in me. I was lucky today, but I’ll take it. Our Andretti cars were the class of the field and had unbelievable race pace.”

“No words really for how gutted I am,” said McElrea. “I want to say sorry to all my backers, investors, sponsors and Andretti for not rewarding them with a win. Dominated all weekend, and the race was no different until I made a mistake behind lapped traffic that was just silly. Ended up crashing into the fence, race over.

“Although I didn’t get the result, I’m happy to show my speed in my debut, and many positives to take.”

“Looking forward to the bounceback.”

Rasmussen added: “Gutted! Having done a great race until the second to last lap I have to be honest, that I was emotionally torn apart, having to realise that I ran into mechanical problems that close to the finish line.”

The Dane said he was “extremely proud” with his race performance, and that “I know we will prevail” in future events.