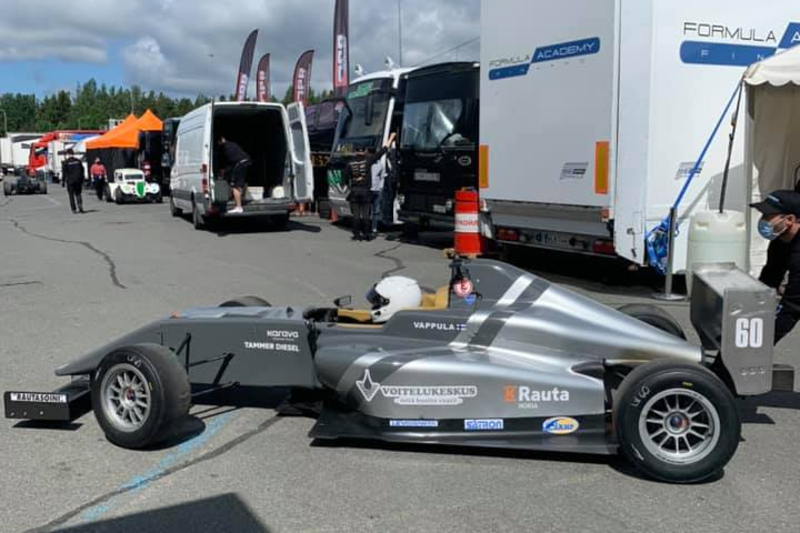 Nikita Alexandrov and Leevi Vappula won the two races of Formula Academy Finland’s third round of the season at Botniaring.

Henri Saaskilahti was 0.696s off the pace in third place, ahead of Vappula and Nestori Virtala who did not set a representative lap.

Rain that came and went through Saturday meant the choice of tyres for race one was left until the final moments, with grooved tyres the option that came out on top. The track itself ended up not being too wet, and there was a lead quartet of cars for much of the race before Vappula made an error that plunged him back.

Kuivakangas lost his pole advantage but stayed with the close battle between Alexandrov and Saaskilahti for victory. Alexandrov triumphed by just 0.289s to finally take his first win, having raced in the series in 2018 and then been title runner-up in 2019 but never made the top step of the podium.

Saaskilahti in second place held an advantage of just 0.343s over Kuivakangas (who opted for slicks) in third, while Vappula dropped 14s and Virtala was lapped by the winner in Formula Open Finland (which shared its grid with FAcademy Finland and had Formula 3 cars competing).

Race two took place in torrential rain, and Vappula made use of having no spray to worry about to lead from the front and take victory on his sixth start in single-seaters. The young Finn is also embarking on a rookie campaign in senior karting.

In second place, and less than a second behind with almost zero visibility ahead of him, was Alexandrov. He was battling with Saaskilahti until he “tried to overtake on the last lap and locked all four wheels on braking from a speed of 180kph and went off the track”.

Saaskilahti managed to recover his car to finish almost 12s back in fourth while Kuivakangas maintained his points lead by taking third place.