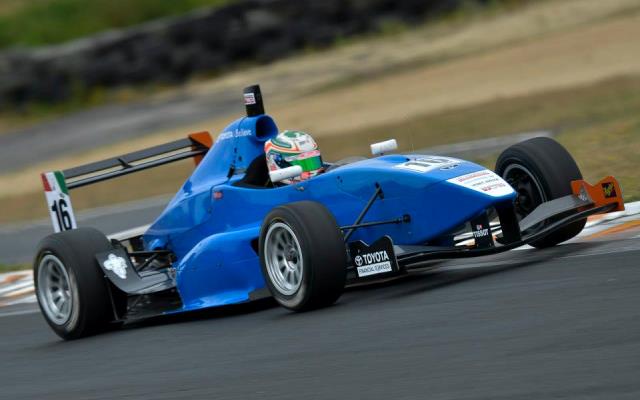 American youngster Neil Alberico will race in the Toyota Racing Series at the start of next year thanks to the Team USA Scholarship.

21-year-old Alberico finished runner-up in the USF2000 Championship this year and will move on to the next step of the Road to Indy ladder with a graduation to Pro Mazda next year.

In preparation for that he will contest the New Zealand-based TRS with the Victory Motor Racing squad with support from the Team USA programme which has provided opportunities for promising American drivers to race overseas since its foundation in 1990. Alberico was a scholarship winner in 2011 and raced in Formula Ford GB.

?I am honoured to be a part of such a prestigious program,? said Alberico. ?New Zealand is going to be an exciting venture for Team USA. I am very much looking forward to the partnership between the guys at Victory Motor Racing, the Toyota Racing Series and the Team USA Scholarship.

“Big thanks to all the supporters involved in this year?s program to make this opportunity possible. I?m psyched to be headed to New Zealand in January to duke it out with some of the best drivers from around the world.?

Jeremy Shaw, the Team USA Scholarship founder and journalist and broadcaster, said: ?This is such an exciting development for our program. I was in New Zealand in 2005, running a Team USA Scholarship Formula Ford car, when TRS made its debut, and I was immediately impressed by the level playing field, the attention to detail and the level of intensity.

“The series has continued to grow in stature and credibility ever since. Finally, we have been able to put together all the pieces to take part ourselves. We haven?t been able to fund the entire program but I?m thankful not only for our own supporters but also some of Neil?s who have agreed to pick up the slack and ensure that he will contest all five weekends.?

The Victory team scored podiums in TRS in 2013 with Ignazio D’Agosto (pictured above) and?Damon Leitch, having run the latter to third place in the 2012 standings.

Alberico is the second driver after Pedro Piquet to officially announce his participation in the 2014 season, which commences at Teretonga on 11-12 January and runs for five weeks.