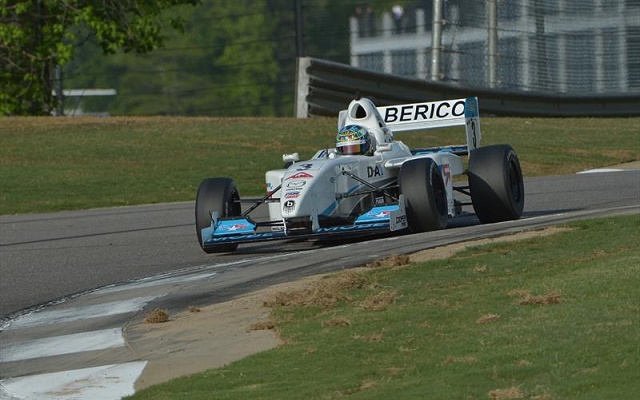 Pro Mazda championship leader Neil Alberico added his third win of the season in the second race of the Barber Motorsports Park round.

Starting in fourth, Alberico was up to second early on and, after inheriting the lead, would prove unstoppable, surviving two restarts along the way to the checkered flag.

Race one winner Weiron Tan kept the lead from pole on the opening lap, but not before forcing off Timothe Buret at the start-finish line, with the Frenchman ending up down in P12.

When the full-course yellow came out for pitlane entry cones knocked onto the track, Tan was swiftly penalised and sent to the back of the grid.

Alberico, who passed Santiago Urrutia at the start, was into first and comfortably led the short first green flag period, which was over when Expert class driver Jay Horak went off.

The race restarted again at halfway point and saw Alberico storm off into the distance. He quickly built up a solid lead over Urrutia and eventually was four seconds in the clear.

Within the pack, Buret was up to eighth, passing teammate Jose Gutierrez. Tan was shortly on the Mexican’s rear wing and soon ended up hitting Gutierrez out of the race.

The subsequent safety car ended the race, with Alberico taking the win ahead of Urrutia and last year’s race winner Garrett Grist, who claimed his first podium of the 2015 regular season.

Parsons strikes back to win race two at Sepang